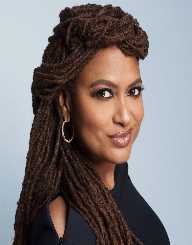 American film producer, director, and writer Ava DuVernay was born in Long Beach, California on the 24 August 1972 to Darlene Maye and Joseph Marcel DuVernay III. She was raised in Lynwood, California by her mother and stepfather Murray Maye. She has two sisters.

She enrolled at the University of California in LA where she majored in African-American studies and English literature.

Initially, DuVernay was intent on becoming a journalist. She did an internship with CBS News when working on the O.J. Simpson case, she changed her mind about a career in journalism. Instead of journalism, she focused on publicity and film marketing, founding her own business, The DuVernay Agency. Films she was involved in include Dream Girls, Collateral and Invictus. She came to public attention with her documentary This In The Life (2008) which investigated the popularity of hip-hop culture in Los Angeles during the 1990s.

Her debut film, I Will Follow (2010) was made on a $50,000 budget, and she shot it in 11 days. The film was met with critical acclaim, and her following film, Middle of Nowhere (2012) was equally successful. Selma (2014), a historical drama was nominated for a Golden Globe. She was nominated for an Oscar for the documentary 13th, which examined the criminal justice system. Then she made history when A Wrinkle in Time, made her the highest grossing African American female filmmaker on record.

DuVernay was the first African American woman to be awarded the Best Director Prize at the Sundance Film Festival (2012) for Middle of Nowhere. She is a member of the Academy of Motion Picture, Arts and Sciences, both as a director and as a writer. Awards and nominations include a Golden Globe nomination for Selma (2014) and a 2016 Oscar nomination for the documentary. Fortune Magazine named her one of the country's 50 Greatest Culture Leaders, and she has also featured on TIME magazine’s 100 Most Influential People list.