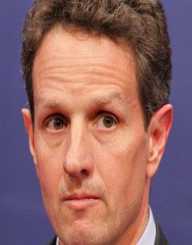 Timothy Geithner is an American economist and banker who served as the President of the Federal Reserve Bank of New York from 2003 to 2009. Born on August 18, 1961, he also served in President Barack Obama’s administration as the 75th United States Secretary of the Treasury from 2009 to 2013. During his tenure as President of the Federal Reserve Bank, he played an instrumental role in taking crucial decisions in the US government efforts to recover the 2007-08 financial crisis.

Timothy Geithner supervised the allocation of $350 billion under the Troubled Asset Relief Program to lessen the impact of the subprime mortgage crisis. He has been serving as the president and managing director in the private equity firm Warburg Pincus, in New York City.

Timothy Franz Geithner was born on August 18, 1961, in Brooklyn, New York to German American father, Peter Franz Geithner and Deborah Moore. His mother was a pianist, and a piano teacher and his father was a consultant on international development who served as the director of the Ford Foundation’s Asia program in New York during the 1990s. The family traveled extensively throughout Asia and Eastern Africa due to his father’s work. As such, Geithner spent his adolescence living in countries like Zimbabwe, India, and Thailand.

After graduating from the university, Timothy Geithner worked for Kissinger Associate in Washington D.C from 1985 to 1988. He then joined the International Affairs division of the U.S. Treasury Department in 1988, holding several positions in international affair division. During this period, he worked with Lawrence Summers and Robert Rubin, who is considered his mentors.

He earned promotion to undersecretary for international affairs, during which he represented the agency at meetings of Group of Eight. While there, he helped manage financial crises in South Korea, Brazil, Mexico, Indonesia, and Thailand.

Timothy Geithner received an appointed as CEO of the Federal Reserve Bank in 2003. Serving in that capacity, he became the Vice Chairman of the Federal Open Market Committee. He became a member of the Group of Thirty, the Washington-based financial advisory body in 2006. In 2005, Geithner foresaw that the impending crises of Wall Street trading in the financial derivative, but did not put in place reforms to curb its dangers.

This would contribute to the financial recession. During the financial crises, he played a vital role in the US government’s effort to salvage the situation. He worked with then-Treasury Secretary Henry Paulson, to save Bear Stearns from going bankrupt. Bear Stearns was sold to JPMorgan Chase, with financial assistance from the New York Fed. He also helped to develop measures in response to other cooperate meltdown during the crises.

Secretary of the Treasury

President Barack Obama nominated Geithner to be Treasury Secretary on November 24, 2008. However, it was revealed that he had not paid for the Social Security and Medicare payroll taxes for three years (2001-2004) during his stay at the International Monetary Fund. The amount he owed at the time was $35,000. He later paid all taxes he owed the government.

On January 26, 2009, the Senate with the vote of 60-34 confirmed his appointment as secretary of the treasury. Vice President Joe Biden sworn him into office, a ceremony witnessed by President Barack Obama. He stepped down in 2013 to take a position as the president of the private equity investment firm Warburg Pincus in 2014.