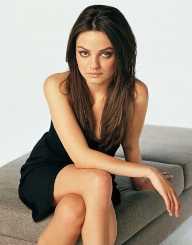 Malena Kunis or Mila Kunis was born on August 14, 1983, in Chernivtsi in Ukraine (then under USSR). She has an elder brother, Michel. Mila Kunis was born to Mark, a mechanical engineer and Elvis, a teacher in physics, in Ukraine. Her parents were determined to give a better life to their children and migrated to Los Angeles in the USA. In 1991, in USA Mark started working as a cab driver, and Elvis in a pharmaceutical company. They belong to a Jewish family.

Mila Kunis and her brother were admitted to Rosewood Elementary School. They took additional tuition to learn English since they did not know English at the time they migrated to the USA. She studied at Howe Bancroft Middle School and Fairfax High School. She graduated in 2001. She attended the University of California for a short period and Loyola Marymount University in Los Angeles. Kunis attended acting classes after school hours.

Mila Kunis enrolled herself for acting classes when she was nine years at Beverley Hill Studios. Here she met, Susan Curtis, who became her manager. She appeared for a commercial for Lisa Frank.

Mila Kunis appeared for a television show on “Days of our Lives” and in “Baywatch.” She also appeared in minor roles in “7th Haven”, “Santa with Muscles,” Honey and other television shows. Kunis, at the age of 10, played the role of a Mexican girl in the film, “Make a Wish, Molly.”

Mila Kunis then appeared in the role as Jackie Burkhart in “That 70’s Show”. She won the Best Actress Award for this part.

During the same year, Mila Kunis played a role in an animated serial Family Guy based on her performance in her role in “That 70’s Show”. She also gave her voice in the Family Guy video games. For this, she was nominated for the Annie Award.

The reviewers were appreciative of her performance. She was nominated for ‘’Teen Choice Award’’. She acted as an assassin in an action movie film ‘’Max Payne’’ For this, she had to undergo training in guns and boxing required for her role in this film. Though the film was a success, there was the criticism against her role. She was chosen again for the Teen Choice Award.

Mila also acted in a comedy film ‘’Extract” and another action film “The Book of Eli.” The film received mixed reviews though the film was a success. She played the role of a ballet dancer in the movie ‘’Black Swan’’. Mila earned her first Golden Globe award. The film was adjudged as the Best Picture.

In 2012, the film ‘’Ted’’ was a commercial success in which Kunis co-starred. She also played the role as one of the witches in Walt Disney picture, “Óz The Great and the Powerful’’. She also, co-starred in a crime thriller, Blood Ties’’. She was one of the Executive Producer for a TV serial, Meridian Hills. The theme was about women’s liberation movement in 1970.

In 2015, Mila Kunis co-starred in a Science Fiction, Jupiter Ascending, directed by Wachowskis. The reviews of the film were not good. Kunis participated, in 2007, in videos website ‘’Funny or Die’’. This was a huge success. In 2010, she featured in ‘’Women We Love.’’

Mila Kunis was a brand ambassador for Gemfields, a company dealing with emeralds and rubies. She was one of the 100 Powerful Celebrities, of Forbes list, 2013. Kunis appeared in a variety of global advertisements for Beam Inc.

Malena Kunis is a supporter of Democratic Party in the USA. Kunis and her long-time boyfriend and co-star Ashton Kutcher were dating in 2012. In March 2014, they were engaged. Their first daughter Wyatt Isabelle Kutcher was born on 30th September 2014. They were married in July 2015 in California. They got their second son, Portwood Kutcher On 30 November 2016.

Mila Kunis had chronic iritis which caused temporary blindness but got corrected by surgery. Her eyes were of different colour – brown in the left eye, and green in the right eye.