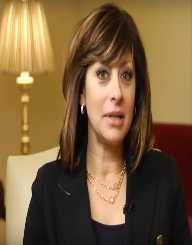 Maria Bartiromo was born into an Italian-American family in Brooklyn, New York on the 11 September 1967. Her parents Vincent and Josephine Bartiromo have three children. Vincent Bartiromo owns an Italian restaurant in New York City, and as a student, Maria used to help out in the restaurant.

In 1988, Maria Bartiromo started her career as an intern at CNN where she remained for five years. She sent her resume to CNBC, and they promptly hired her. In 1995, Bartiromo gained international attention when she began broadcasting live from the New York Exchange. Her appointment was considered groundbreaking because she was the first woman journalist to broadcast from Wall Street.

Maria Bartiromo was appointed a co-anchor with Tyler Mathisen on CNBC’s Business Center show, and her role continued until 1999. By 2002, she was hosting Closing Bell With Maria Bartiromo, a daily news programme. In 2004 she started hosting The Wall Street Journal Report on CNBC.

Maria Bartiromo has appeared in some documentaries. And films. Risk/Reward, the documentary about the lives of women on Wall Street (2003); Her television appearances include The Tonight Show Jay Leno, The Colbert Report and Late Night with Conan O’Brien.

In 2013, the Drudge Report surprised the financial world when they reported that Bartiromo would be changing networks and joining the Fox Business Network. Claire Atkinson, of the New York Post, reported that the Fox contract was worth up to $US million.

Since 1995, Maria Bartiromo has been involved with New York City’s Columbus Day parade, serving as the anchor for the television coverage.

The moniker Honey Money given to Bartiromo by the press in the 1990s seems to have stuck. She is using it to her advantage to develop a book and products aimed at educating children about finance.

In 1997, Maria Bartiromo won the Excellence in Broadcast Journalism Award presented by the Coalition of Italo-American Associations. In 2011, Maria Bartiromo was the first journalist to be inducted into the Cable Hall of Fame. She appeared on the Financial Times: 50 People Who Shaped the Decade (2009). In 2017, Richtopia’s list placed her second their list of 250 Most Influential Business Journalists.

When Todd S. Thomson was fired from Citigroup, there were rumors that one of the reasons for his firing was his close association with the press. A trip that he arranged for Maria Bartiromo to travel Asia in his private plane to address Citigroup clients was cited.

Maria Bartiromo is married Jonathan Steinberg, and they live in New York City.

Maria Bartiromo was raised in an Italian-American Roman Catholic family.