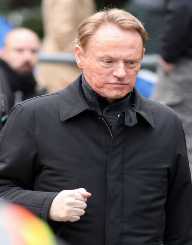 Jared Harris was born on August 24, 1961, in London, England. His parents are Elizabeth Rees-Williams and Richard Harris. Sadly, his parents divorced when he was a child. His mother later remarried to Rex Harrison. Jared’s siblings are Damian and Jamie Harris.

As a young adult, Jared Harris attended Duke University. It was while there that Harris first became interested enough in acting to consider pursuing it as a carer. He eventually did film work while at the school. He graduated from this school in 1984.

After graduating from college, Jared Harris moved back to England. Once there, he began his acting career by joining the Royal Shakespeare Company. As the name suggests, Harris acted in Shakespearean plays while with this group. One of his most famous plays from his time with this group was Hamlet, which he performed in 1989.

In the 1990’s, Jared Harris continued to work on his theater acting. While he was not exclusively working within the Royal Shakespeare Company, he continued to act in Shakespearean plays, like Henry IV, parts I and II. He also appeared in the play Ecstacy in 1995.

The 2000’s were the last decade of Harris’s theater acting career. By this time, he was much more focused on his screen-acting career. The plays he performed in during this decade include Hamlet, More Lies About Jerzy, and Humble Boy.

Jared Harris’s film career began in 1989 when he appeared in a small role in the film The Rachel Players.

In the 1990’s, Jared Harris appeared in over a dozen television shows and movies combined. For most of the decade, he only worked on films. It wasn’t until 1995 that he appeared in his first episode of a television show (New York Undercover). Some of the most famous films Harris was in during the 1990’s include Smoke, I Shot Andy Warhol, White Lies, and The Weekend.

In the 2000’s, Jared Harris began working on more television shows, now earning himself recurring roles in many of them. He still continued to work on films. Some of his most famous films from this decade include Mr. Deeds, The Other Boleyn Girl, Sylvia, Ocean’s Twelve, and The Curious Case of Benjamin Button. Some of the television shows in which he had recurring roles were To the Ends of the Earth, Without a Trace, Fringe, and Mad Men.

In the 2010’s, Jared Harris continued to work both in television and film. He continued acting on both Fringe and Mad Men until 2012. His next major recurring roles were The Expanse, which he began in 2015, and The Crown, which he began working on in 2016. He worked on both of these shows until 2017. He is currently filming another television show, predicted to come out in 2018, called The Terror. Some of his most famous films from this decade include Pompeii, Poltergeist, The Mortal Instruments: City of Bones, Lincoln, Extraordinary Measures, and Sherlock Holmes: A Game of Shadows.

Over the course of his career, Jared Harris has won a handful of acting awards and has been nominated for about a dozen others. Some of his most impressive awards are listed below.

Jared Harris was first married to Emilia Fox. However, this couple divorced in 2010. He is currently married to Allegra Riggio, who he married in 2013.