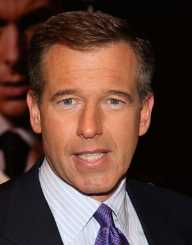 Brian Douglas Williams is an American journalist who served as the anchor managing editor of the NBC Nightly News. Williams was held in high repute serving for about ten years as anchor of NBC News until some of his lies started coming out. He was suspended for six months in February 2015 for false representation and exaggeration while covering the Iraqi war in 2003. After his suspension, he was demoted with a pay cut to serve as the anchor of breaking news and special reports at the cable network MSNBC.

Brian Wiliams is also the host of The 11th Hour with Brian Williams on the network. Williams started working as NBC news anchor in 2004 and on an excellent note. Few months on the post, NBC News won a Peabody Award for the coverage of Hurricane Katrina. However, the Iraq incident coupled with others tarnished his hard-earned reputation.

Brian Douglas Williams was born on May 5, 1959, in Ridgewood, New Jersey to Dorothy May (née Pampel) and Gordon Lewis Williams. His mother was an amateur stage actress and his father an executive vice president of the National Retail Merchants Association, in New York. Raised as a Roman Catholic, he is the youngest of four siblings. Williams spent nine years in Elmira, New York and left for Middletown Township, New Jersey during his junior high school education.

Brian Wiliams received secondary education at the Mater Dei High School in New Monmouth. He served as editorial editor for the school's newspaper. Williams also served as a volunteer firefighter for the Middletown Township Fire Department for three years. He continued his education at the Brookdale Community College, moving to The Catholic University of American and later at The George Washington University. He left college without graduation to intern with President Jimmy Carter’s administration.


Career as a Broadcaster

Brian Douglas Williams started his career as a broadcaster with the Pittsburg, Kansas based KOAM-TV in 1981. The following year he worked as a news correspondent for WTTG-TV until 1986. He also served as a New Jersey correspondent for WCAU-TV from 1985 to 1987. Picking up sharply, he was hired by WCBS-TV as an anchor of weekday noon and reporter for weekend night newscasts from 1987 to 1993. While there, his report on the stock market collapse won his an Emmy Award.

In 1993, NBC News employed Brian Douglas Williams as the chief White House correspondent and anchor of the national Weekend Nightly News. He was promoted to anchor and managing editor of The News with Brian Williams, in 1996.

The anchor of NBC Nightly News

On December 2, 2004, Brian Douglas Williams was made a substantive anchor of NBC Nightly News. He was soon welcomed with two natural disasters, the Asian tsunami, and Hurricane Katrina, which he covered extensively. The coverage of Katrina earned NBC News a Peabody Award, George Polk Award, and DuPont-Columbia University Award. In a citation for the Peabody award, the Peabody committee stated, "Williams and the entire staff of NBC Nightly News exemplified the highest levels of journalistic excellence in reporting on Hurricane Katrina."

The Arizona State University awarded Brian Wiliams the Walter Cronkite Award for Excellence in Journalism in 2009. William gained a strong reputation as one of the credible sources of news until he was hit by scandals. He was suspended for six months in February 2015 for distorting facts during his war experience in the 2003 invasion of Iraq. He was at the time having a five-year contract with NBC with an annual salary of 10 million signed in December 2014.

In March 2013, Brian Douglas Williams appeared as a guest on the David Letterman show, where he recounted his experience during the Iraq War. He stated a helicopter he was in had to make a forced landing after a rocket-propelled grenade hit it. As soon as the story broke, military personnel who was on board the real helicopter which was hit stated in a Facebook post that Williams was not part of that crew. On February 4, 2015, William came out to acknowledge the soldier’s version of the story on Facebook, saying that had been mistaken.

However, two days later on Nightly News, Brian Wiliams again misrepresenting the fact said he was rather on board a helicopter following the one that was downed. The real story is that the helicopter William was in was about 30 minutes late to where the incident happened. These contradictory reports by William generated a backlash, and it became known that William has for all this while distorted the fact of what happened. He was therefore suspended for six months without pay.

After his suspension, Brian Douglas Williams did not return to NBC but as a chief anchor for MSNBC. The “demotion” to MSNBC is said to have come with a pay cut. He has since covered many events including Pope Francis visit to the United States, the shooting incident at the Umpqua Community College and the Paris, San Bernardino terrorist attack. Williams was made the chief elections anchor for the network in 2016. He is also the anchor for the late-night show The 11thHour with Brian Williams.

Brian Douglas Williams and Jane Gillan Williams have been married since June 7, 1986. The couple has two children a daughter actress Allison and son Doug who is a late-night anchor of GeicoSportsNite on SportsNet New York.

Brian Douglas Williams has been awarded several honorary degrees by institutions like the Catholic University of America with a Doctor of Humane Letters (DHL), Bates College with DHL and Ohio State University with Doctor of Journalism. Others are Doctors of Law from the University of Notre Dame and DHL from George Washington University. He has 12 News and Documentary Emmy Awards as an anchor of Nightly News.