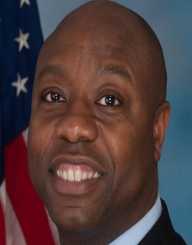 American politician Tim Scott was born Timothy Eugene Scott on the 19 September 1965 in North Charleston, South Carolina to Ben and Frances Scott. His parents divorced when he was seven years old, and his father was in the US Air Force based in Colorado. His mother, a nurse’s aide, raised her children on her own. Scott was in high school and working part-time when the owner of the business, John Moniz, convinced him to use his academic ability and intelligence to succeed in life.

Tim Scott graduated from high school and won a partial football scholarship to Presbyterian College. He then transferred to Charleston Southern University, where he studied political science, obtaining a BA in 1988.

As a conservative, Tim Scott opposed most of the policies of President Barack Obama. He was active in seeking to repeal the Patient Protection and Affordable Care Act (2010), he is also opposed to same-sex marriage and abortion rights. In October 2018, Scott issued a statement confirming that he had voted for Judge Brett Kavanaugh to be appointed to the US Supreme Court.

Tim Scott is an Evangelical Christian. He is not married.