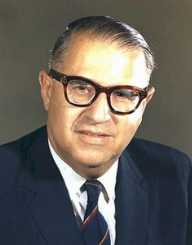 Abba Eban was born on February 2, 1915. He was an Israeli Politician and diplomat. He was well versed with the Hebrew and Arabic languages. He was a great politician who was well established in the Israeli government. In his career, he has held the post of Deputy Prime Minister, Minister of Education and Foreign Affairs Minister. He also served as an Israeli ambassador to the United States and the United Nations. He was also known for his expertise in speaking the English language that he was considered as an orator. Apart from his political career he also authored nine books. He was very good at languages that he was elected the vice president of the United Nations General Assembly.

Abba Eban was born on February 2, 1915, in Cape Town, South Africa. He was born Aubrey Solomon Meir Eban, but he later changed his name to Abba Solomon Meir Eban. His family moved to the United Kingdom while he was still very young. At a tender age, he was taught the Hebrew language, Talmud and Biblical Literature by his grandmother. His family also lived in Belfast, Ireland. He attended St. Olave’s Grammar School for his primary education. After finishing his primary education, he joined Queen’s College, Cambridge where he took oriental languages and classics. While he was in college, he was actively involved in the Federation of Zionist Youth.

Abba Eban was also the author of a journal titled ‘The Young Zionist.’ During World War II he joined the British Army. He was an intelligent officer then in Jerusalem. His work was to train soldiers and other people on how to resist a German invasion. In 1947, he translated the novel ‘Maze of Justice: Diary of a Country Prosecutor’ which was written by Tawfiq-Al-Hakim.

Abba Eban moved back to London briefly and was later on posted to New York by the Jewish Agency’s Information Department where he worked. In 1947, he served as a Liaison Officer to the United Nations Special Committee on Palestine. While on the Palestine case he was successful in making recommendations for the partition of Palestine into Jewish and Arab segments which were approved. This led to the passing of Resolution 181.

Abba Eban was also the president of Weizman Institute of Science.  In 1966, he became the Minister for Foreign Affairs in Israel, a position that he held until 1974. During the period 1966 to 1974, the ‘Six Day War’ between Egypt and Israel occurred. Abba also served as the chair of the Foreign Affairs and Defense Committee from 1984 to 1988. He also authored books such as ‘Voice of Israel,’ ‘My County,’ ‘My People,’ ‘Abba Eban: An Autobiography,’ ‘Personal Witness: Israel Through My Eyes’ and ‘Diplomacy for a New Century’ among other books.

In 2001, Abba Eban was awarded the ‘Lifetime Achievement Award’ by the Israeli Government. He was ranked number fifty two among the Great Israelis of All Time by ‘Ynet.’

In 1945, Abba Eban married Susan Ambache with whom he had two kids, a son, and a daughter. His son Eli teaches at Indiana University. He died on November 17, 2002, and was survived by his wife and his two children. He remains to be a political character that will be remembered in Israel for a very long time.