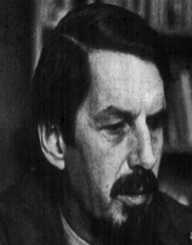 Robert Creeley was an American poet and professor.

Robert White Creeley was born in the town of Arlington, Massachusetts, on May 21, 1926. He spent his childhood in the town of Acton. He lived with his mother and his sister. When he was two years old, he had an accident, and he lost his left eye.

Robert Creeley studied at the Holderness School near Plymouth, New Hampshire. He enrolled at Harvard University in 1943. He left the next year to serve in the U. S. Army in India and Burma. After that, he returned to Harvard. Soon after, he left again. In 1955, he got a bachelor’s degree from Black Mountain College in North Carolina. Five years later, he got a master’s degree from the University of New Mexico in Albuquerque.

In 1954, Robert Creeley became a literature professor at Black Mountain College. He also worked as an editor of the magazine Black Mountain Review. From 1958 to 1961, he taught at Albuquerque Academy, an independent school. In 1967, he became a professor of poetry and the humanities at the University of Buffalo. He stayed there until 2003. After that, he got a job at Brown University.

Robert Creeley wrote and published over sixty books, mostly collections of his poetry. Most of them were printed in the United States. Some were printed in Spain, Germany, and the United Kingdom. His first collection, Le Fou, came out in 1952. His first famous collection was For Love, published in 1962. He was a prolific author, and he produced a lot of work. His fame grew continuously. He took part in events such as the Vancouver Poetry Festival and the Berkeley Poetry Conference.

From 1989 to 1991, he was the poet laureate of the State of New York. He associated himself with many other authors, such as Charles Olson, Paul Blackburn, Robert Duncan, and others. Apart from poetry, he occasionally worked on prose. He wrote a novel called The Island and a short-story collection called The Gold Diggers.

Robert Creeley received the Robert Frost Medal, the Lannan Lifetime Achievement Award, the Bollingen Prize, the Shelley Memorial Award, and others. He also received a grant from the Rockefeller Foundation and the National Endowment for the Arts. He became one of the fellows of the American Academy for the Arts and Sciences.

Robert Creeley died of pneumonia on March 30, 2005. He passed away in Odessa, Texas, but he was buried in Cambridge, Massachusetts.