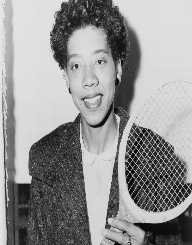 Althea Gibson was born on August 25, 1927. She was an American professional golfer, tennis player and the first black athlete to play international tennis. She developed the love for the sport at a tender age even though she came from a poor background. In 1956, she won a Grand Slam title making her the first black ever to win the title.

Gibson could not play in the 1940s and 50s as most tournaments were not open to African Americans. This fact did not hinder her from engaging in what she loved most, sports. In 1951, she became the first African American to play at Wimbledon. In 1957, she won the women’s singles and doubles at Wimbledon. In 1958, she won the US Open. Gibson died on September 28, 2003.

Althea Gibson was born on August 25, 1927, in Clarendon County, South Carolina. She was born to Daniel and Annie Bell Gibson who were cotton farmers. She was the eldest of her four siblings. Gibson did not attend school frequently as she did not come from a well-off family. This made her develop a liking for sports. Her family lived close to the ‘Police Athletic League’ which was meant to sport-related activities.

From that place, Althea learned how to play paddle tennis. In 1939, she won the New York City’s ‘Women Paddle Tennis Championship.’ Her talent was noticed by Buddy Walker who decided to help her scale her potential. In 1941, Gibson was introduced to the Harlem River Tennis Courts after winning several tournaments hosted by the local recreation department.

In 1941, Althea Gibson won the ‘New York State Championship.’ This was an event organized by the American Tennis Association (ATA). This association sponsored and promoted African American players in tennis. After winning the tournament, Walter Johnson took her up. In 1944 and 1945, Gibson won in the girls’ category of the ‘ATA National Championship.’ Hubert A. Eaton decided to offer her financial assistance. Hence she shifted from Harlem to North Carolina in 1946.

In 1946, Althea Gibson lost a title in the women’s category of the ‘ATA National Championships.’ In 1947, she won the title and kept on winning the tilt for nine years (from 1947-1956). Due to her success in the ATA Championships, she gained access to other competitions such as the ‘United States Tennis Association.’ In 1949, she qualified for the quarter-finals in the ‘National Indoor Championship.’ She earned full sports scholarship from the Florida A&M University after completing her primary education from Williston High School.

Althea Gibson went through a lot of degradation in school as she was a talented player but could not play tennis due to apartheid. The sport was left to the whites, and there was no room for blacks. Alice Marble wrote an open letter accusing the tennis fraternity of discrimination towards black players. This message caused a lot of stir in the sports fraternity.

In 1955, Althea Gibson was selected by the ‘American Lawn Tennis Association’ to be a part of the State Department’s goodwill delegation sent to Asian countries. She became an expert in volley due to her physique. In 1956, she won her first grand slam title in the ‘French Open.’ In 1957, she won the singles and doubles title in Wimbledon. She also won the US Open title in the same year.

Althea Gibson retired from amateur tennis at 31. In 1959, she released her album ‘Althea Gibson Sings.’ She also worked as a sports commentator. At the same time, she took to print and television advertisements. In 1964, she participated in the ‘Ladies Professional Golf Association’ tour. She retired from golf in 1978. Gibson tried tennis again during the open era, but her age would not allow her to compete with young players. She trained upcoming tennis athletes and held the post of New Jersey’s Athletic Commissioner in 1976. She also worked on the supervisory body for the Governor’s Council on Physical Fitness and Sports.

In the years 1957 to 1958, Althea Gibson was honored as the ‘Female Athlete of the Year’ by Associated Press by being the number one woman in the US and the world. In 1971, she was inducted into the ‘International Tennis Hall of Fame.’ In 1991, she was honored by the ‘National Collegiate Athletic Association’ with the ‘Theodore Roosevelt Award.’

In 1965, Althea Gibson married William Darben. They divorced after 11 years of marriage. In 1983, she married Sydney Llewellyn, but they divorced five years later. Gibson had no children of her own.

Althea Gibson died on September 28, 2003, due to respiratory failure and bladder infections.