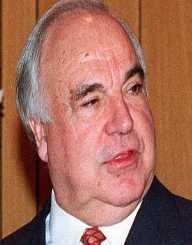 Helmut Kohl was born on 3rd April 1930, to Hans and Cacille Kohl. He was born in Ludwigshafen in the Free State of Bavaria, located in the German Empire. He was the youngest of three children. Helmut Kohl's father was a veteran of the Imperial army, and later, a civil servant.

His older brother also became a soldier, and he was just a teenager when he got killed in World War II.

Hitler was in power at the time, and it was a requirement for children in Germany to join the DeutschesJungvolk, which was part of the Hitler Youth. In April 1945, Helmut Kohl was sworn into the Hitler Youth. It was only days later that the war ended. Kohl was drafted into the army, but he was very fortunate that he didn’t have to take part in combat.

Helmut Kohl did his early schooling at the Max Planck Gymnasium and then went to Frankfurt where he began to study law in 1950. The following year, Helmut Kohl transferred to Heidelberg University and studied history and political science.

Helmut Kohl graduated in 1956 and then became a fellow at the Alfred Weber Institute of Heidelberg University. He graduated in 1958 with his doctorate degree in history.

After achieving his doctorate, Helmut Kohl began his career. His first job was at a foundry as an assistant to the director. He left the position to begin working as a manager for the Industrial Union for Chemistry in Ludwigshafen.

Helmut Kohl's family were Catholic, and they were sympathetic to the Catholic Centre Party. Back in 1946, Helmut Kohl joined the Christian Democratic Union of Germany which had only been recently formed. When he turned 18, Helmut Kohl became a full member.

In 1964, Kohl joined the board of the federal CDU. In 1966 he made a bid for a position on the executive committee, but he didn’t succeed.

Helmut Kohl took over two years later, and in May 1969 was elected to the position of Minister-President of Rhineland-Palatinate. At the same time, he became the vice-chair of the federal CDU party.

Over the next three years, Kohl tried, without success to introduce party reform, and he also ran for the position of chairman but failed on his first attempt. He lost the vote toBarzel, but in 1973, Barzel announced he would not re-contest the position.

Helmut Kohl took over as chairman of the party in June 1973, and he remained in the position until 1998.

In 1975, Helmut Kohl was nominated by the party as their candidate to run for chancellor, and he was also re-elected as the party chairman. Although the party won over 48% of the vote in the 1976 federal election, they were unable to win power.

In the 1980 elections, the CDU once again missed out on winning. Kohl remained leader in opposition. The Free Democratic Party (FDP) began talks with the CDU and formed a coalition. In 1982, a vote of no confidence was proposed by the CDU, and it was supported by the FDP. The motion carried, and a new coalition government was formed.

Helmut Kohl became Chancellor of West Germany. He was only in the position a month when another vote of no confidence was called, and he deliberately lost it by having his party members abstain from voting. New elections were called.

In March 1983, Kohl won in his own right. In 1984, he met with the French President, Francois Mitterrand, and the two formed an alliance which would advance reform in Europe in the future.

Kohl introduced several reform policies while he was chancellor. Among other things, he introduced an allowance for parent to help raise their children, and increased unemployment benefits for older citizens. He also introduced unpopular policies such as the Health Care Reform Act of 1989.

In 1987, Kohl won again, to form his third cabinet as chancellor.

In 1989, Kohl etched his place in history when he was instrumental in the reunification of Germany. His mandate was unity for East and West Germany, and when he realized the East German Communist regime was collapsing, he didn’t waste time in moving ahead towards unity for the two countries. He didn’t ask his coalition partners, or anyone else. He came up with a plan and put it in motion.

In May 1990, Kohl signed an economic and social union treat with East Germany. The reunification treaty was signed in August of the same year, and it was approved by both parliaments in September 1990.

Helmut Kohl was now chancellor of a united Germany.

The first united German elections in 1990 saw Helmut Kohl win by a landslide to form his fourth cabinet. Although his margin was reduced, he one yet again in 1994.

In the 1998 elections,  Kohl was defeated. He resigned as leader of the CDU and retired from active politics.

In 1999, a scandal within the CDU came to public attention. Illegal donations had been accepted during Helmut Kohl's leadership. Although he wasn’t found guilty of wrongdoing, Helmut Kohl's reputation in Germany suffered in the short term after his retirement.

In the years after he retired, Kohl remained with the party in a consultative capacity.

Helmut Kohl had a stroke in February 2008, along with a fall at the same time which caused serious head injuries.

Helmut Kohl received many awards and honors, some of which include:

1998:   The second person to be awarded the Grand Cross in Special Design of the Order of Merit of the Federal Republic of Germany

Helmut Kohl married Hannelore Renner in June 1960. The couple had been together for several years. They had two sons together, Walter and Peter. Renner was a vital advisor to Helmut Kohl, and she was also a strong advocate for the reunification of Germany. Renner committed suicide in 2001.

Helmut Kohl's second marriage was very controversial. He was 78, and his second bride, Maike Richter, was 44 years old. They married when Helmut Kohl was in hospital after his accident.

Kohl's son Peter stated that his father had no intentions of marrying Richter, and the insinuation was that she pressured Helmut Kohl while he was ill. After their marriage, Kohl became estranged from his children and grandchildren.

Richter received a lot of criticism from Kohl’s sons, his friends, and the German media.

Helmut Kohl has been recognized as one of the greatest European leaders in the 20th century. He led Germany through one of its greatest moments in history when East and West became one and reunified.