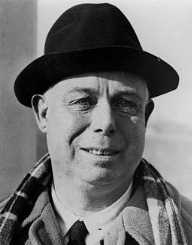 Jean Renoir was born on September 15th, 1894. His place of birth was in Paris, France. Renoir earned his fame for being a film director, actor, author and a producer. In his film and acting career, he is to be credited for being featured in more than 40 silent films. Some of the best works that he is to be remembered for include La Grande Illusion – 1937 and The Rules of the Game – 1939. In 1975, Jean Renoir was awarded a Lifetime Achievement Academy Award. This was in appreciation of his undying contribution to the motion picture industry.

Jean Renoir was born on September 15th, 1894. He was the second born son of AlineRenoir and Pierre-Auguste Renoir. His father was a celebrated painter during his era. Pierre Renoir, Jean’s brother, was also an actor. His other younger brother named Claude Renoir also had a fair share of minor roles to play in the film industry.

One of the first films that Jean Renoir directed was the 1924 silent film called Une Vie Sans Joie or Catherine. This film starred his wife named Catherine Hessling. During this period, Jean Renoir struggled a lot to gain recognition from the films that he was released into the industry. This prompted him to sell some of the paintings that he had acquired from his father. This was done to ensure that he was able to finance his film directing career.

In spite of the rough path that Jean Renoir had been through during the early 1920s, his luck changed in 1930s. Success was his second name at this time. In 1931, he released the first sound film that he had directed called On purge bébé - Baby's Laxative. The same year, he directed La Chienne - The Bitch. In 1932, he directed Boudu Saved From Drowning. In the mid-1930s, his films took a political direction as most of them reflected the political movements that were ongoing. Some of these films included The Crime of Monsieur Lange – 1935; Life Belongs to Us – 1936, and La Marseillaise – 1938.

The year 1937 brought huge success to his side as he made one of his most remarkable films La Grande Illusion. The film was commercially successful. The Human Beast came in next the following year. This film was also positively received out there. In 1939, he had amassed a lot of wealth which ensured that he was in a position to finance his films. During this year, he directed The Rules of the Game which was later considered as his bestselling directing works.

His career in Hollywood was not as good as what Jean Renoir had done before. Here, his career took a challenging turn as it was a daunting task for him to settle on something that suited him. With time, he directed Swamp Water – 1941. Two years later, he was a co-producer for the film This Land Is Mine. Around this period, Jean Renoir directed The Southerner – 1945. This film later gained the recognition as his notable American film. He earned an Academy Award nomination for the film. Other Hollywood works that he released were films such as Diary of a Chambermaid – 1946, The Woman on the Beach – 1947 and several others.

Jean Renoir tied the knot for two times. His first marriage was to Catherine Hessling. Later on, he wedded Dido Renoir. He had one son from his relationships.