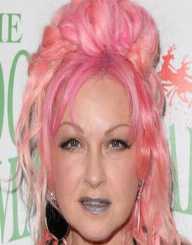 Cynthia Lauper was born on June 22, 1953, in Astoria, New York, USA. She later took on the nickname Cyndi, which is the name she is best known for now. When Lauper was five years old, her parents divorced. Because of this, she and her two siblings lived with their mother during their childhoods.

Cynthia Lauper found her love for music early on in life. By the time she was in middle school, she was already writing her songs. Singing was her favorite thing to do, musically. However, her professional music career didn’t begin as early as she might have wanted it to. Before her career kicked off, she spent several years working in average office jobs and working as a waitress.

While working other jobs, Cynthia Lauper had been in some unsuccessful hobby bands. It wasn’t until he joined the band Blue Angel that she finally had a taste of success.

Some of the other members of this band included John Terry, Arthur Neilson, Lee Brovitz, and Johnny Morelli. This band first formed in 1979 and released its first and only album in 1980: Blue Angel. This band later broke up in 1982. The band later reformed for a year in 1987 without Lauper.

After Blue Angel broke up, Lauper began working on her solo singing career. Her first album came out in 1983 and was called She’s So Unusual, which is exactly what many people thought about her when the album first came out. Cynthia Lauper had a punk-rock look, but she sang hit pop tunes. She was edgy and relatable all at the same time. Many teens of the 1980’s loved her music.

Lauper’s second album came out in 1986 and was called True Colors. This album was even more successful than her first, in part because her first album helped to make her famous. By the time True Colors came out, Lauper was an internationally known pop sensation.

Her third album, A Night to Remember, was released in 1989. This album was not nearly as successful as her first two albums. Her next album, which was not released until 1993 (Hatful of Stars) was also not commercially successful, but Lauper considered it to be one of her best albums, at least in its artistic styling and overall message.

In 1995, she released a compilation album called Twelve Deadly Cyns. In 1997, she released a new album called Sisters of Avalon. This album brought her back into the mainstream, doing better than her last two original records. Her last album of the decade was a Christmas album titled Merry Christmas... Have a Nice Life! Which was released in 1998?

Lauper’s career continued on into the 2000’s. Her first album of the new millennium was At Last, which was released in 2003. She only released one other album during this decade, called Bring Ya to the Brink, which came out in 2008. During this decade, she was focused on other acting as well as singing, which is a part of the reason why she did not produce many albums.

In 2010, Cynthia Lauper released another album, Memphis Blues. It was a new type of music style for Lauper, but she was able to execute the new genre well. It was in that year that her blues album won the Billboard award for best selling blues album of the year.

In 2016, she went on a 30th-anniversary tour. Later on, in the same year, she produced her most recent album, Detour, which once again veered away from her usual pop styling. This album was a country album. Other famous country singers, like Willie Nelson, were also featured on this album.

Cynthia Lauper began acting when she starred in her many music videos, starting in 1983. She later moved on to acting like herself in television shows and movies and then going on to act as characters in television shows. Most of her roles were as one-time television guest appearances. Some the shows and films she was in are listed below.

In 2012, Cynthia Lauper began her writing career (not including the countless songs that she had written in previous decades) by publishing her autobiography-- Cyndi Lauper: A Memoir.

In 2013, she took her writing talents to the stage. She worked on Broadway, where she wrote the lyrics and musical compositions for the play Kinky Boots.

Over the length of her long career, Cynthia Lauper has won dozens of awards (mostly for her singing). Some of her most impressive awards are listed below.

Lauper was inducted into the Songwriters Hall of Fame in 2015.

Cynthia Lauper is an active member of the gay rights movement. She helped to fund the True Colors Fund, which is a group that works towards obtaining equal rights for gay, bisexual, transgender, and other LGBT+ people.

Cyndi Lauper married David Thornton in 1991. This couple has one son together named Declyn. This couple is currently married.