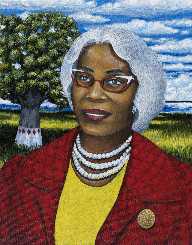 The 3rd of May 1898 brought about the birth of one of the world’s greatest leaders of her time Septima Poinsette Clark. She was a fantastic teacher and civil rights champion in her own right. Clark took up the struggle in the form of social action alongside the NAACP. She was still working as a teacher at the time.

She organized the citizenship schools that sought to help African Americans register to vote. This she managed to achieve with the support of the Southern Christian Leadership Group. Clark died in 1987 on 15th of December on South Carolina’s Johns Island.

She once said, "Knowledge could empower marginalized groups in ways that formal legal equality couldn't."

Septima Poinsette Clark was born on the 3rd of May 1898 to Peter and Victoria Poinsette. She was born the second child of the eight children. Her father was born a slave. The mother, on the other hand, was born a free lady living in Haiti. Her father while on one of his work voyages to Haiti met Victoria and married her in America.

In 1904, Septima Poinsette Clark went to Mary Street School by the time she was six. This was her first educational experience. Her mother decided to take her to an old lady’s place across the street. This was because there was not much learning in the previous setting. There Clark learned how to read and write.

During this period Charleston did not have a high school for blacks. She waited till 1914 when a new school opened in the sixth, seventh and eighth grades. Septima was given a test that saw her move to Avery in the 9th grade when she finished her 6th grade. She graduated from high school in 1916.

Septima Poinsette Clark was not able to go to college at the time due to financial difficulties. She sat for a state provided examination and became a teacher. Later she went to work at Johns Island, in Promise School by the time she was only 18 and stayed there for three years.  She then went to Columbia to complete her B.A at Benedict in 1942 and also received an M.A from Hampton.

Septima Poinsette Clark decided to go into teaching because there was no money when she graduated high school to see her through college. She took her first teaching job at Promise in John Island in the year 1916. After completing her college studies, she could not get a job at her hometown Charleston.

She then decided to move back to John Island and took up a job at one of the rural schools. Clark managed to teach children during the day and have night classes for the adults. During this period, she learned how to quickly pass information to the adults in ways that could stick.

While teaching in John Island, Septima Poinsette Clark realized how much she was being overworked with very little pay. The school she was in had so many children while just across the street was an all-white school with only three children. This brought her attention to the pay gap that they were having between her and the white teacher. This is the main reason that made her join the struggle for equality.

After the death of her husband, she moved to Colombia, South Carolina and joined the NAACP in 1945. Later she went to Charleston in 1947 where she continued to teach. She remained a member of the NAACP. By the year 1956, the government declared it illegal to be a member of the civil rights group as a public employee. Clark was stubborn and lost her job in the process.

As her contribution to the struggle of equality, Septima Poinsette Clark lost her job in 1956. She was however still in the employment of Tennessee's Highlander Folk School. This is one of the many institutions that were behind the struggle for impartiality, mixing and civil rights.

She took up the role and soon was the head of the Highlander Citizenship program. The programs were in place to help the ordinary folk learn how to aid their social circles with basic math and literacy skills. This method of teaching saw that many people were confident and independent enough to vote on their own.

The Christian Leadership Conference adopted her program making Septima Poinsette Clark the director of education and teaching of the program. She saw to the creation of over 800 schools to conduct the same program.

Septima Poinsette Clark got married in the year 1920 to one Nerie Clark. Unfortunately, he passed away only after five years due to kidney failure. She then decided to move to Columbia, South Carolina where she joined the NAACP but also continued to teach.

The death of this modern-day heroine, Septima Poinsette Clark, came on the 15th December 1987. She is the reason why many African Americans could cope with the realities of the modern world without being cheated of their rights blindly.