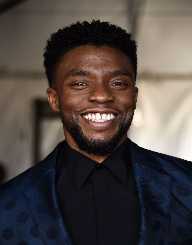 Chadwick was born in Anderson, South Carolina on 29th November 1977. His father Leroy Boseman was a textile industries workers and the mother Carolyn was a Nurse.  Boseman’s family originated from the Yoruba people of Nigeria and the Limba People of Sierra Leone.

Boseman attended T.L.Hanna High school and graduated in the year 1995. He later graduated from Howard University in Washington D.C in the year 2000.  He graduated with a Bachelors Degree in Fine Arts. Through the help of his teacher (Phylicia Rashad) Boseman grew career-wise by attending the British America Drama Academy in London. Later at New York City’s Digital Film Academy he graduated.

Boseman started his career while in high school. He wrote a play (Crossroads) at his high school level. He was the drama instructor in the Schomburg Junior Scholars Program. It was at the Schomburg Center for Research in Black Culture in Harlem, New York.

Boseman is a church choir and a Christian by faith. He is 42 years of age to date.