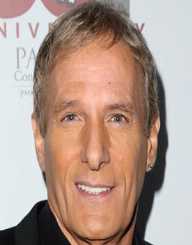 Michael Bolton is an American Singer and Songwriter who is known for his pop and soft rock ballads. He has sold over 75 million copies, has 8 Top 10 albums and two #1 singles at the Billboards Charts in a 40-year long music career.

In his extraordinary music career, Bolton has collaborated with many well-known artists, such as Ray Charles, Celine Dion, BB King, The Lonely Island and more. A talented songwriter, he has written over 200 songs in his career.

Born as Michael Bolotin on February 26, 1953, in a Jewish family, Bolton was the youngest of three children. His birthplace is New Haven, Connecticut. His parents divorced while he was young, and he lost his father when he was 13.

Michael Bolton started his musical journey in 1975 when he was 22. He began as a solo artist but did not get much success. He released a few albums that were not well-received. He then joined as the lead singer of the heavy-metal band “Blackjack.” He auditioned for the lead vocalist position with Black Sabbath but was rejected.

Michael Bolton changed his last name from Bolotin to Bolton, and his first hit song was “How Am I Supposed to Live without You.” He co-wrote this song with Laura Branigan. His early hard-rock albums were not well received by the audience. He continued, however, and with his fifth album Hunger, a soft-rock ballad, he took the music industry by storm. He enjoyed great success with his future albums ‘Soul Provider’ and ‘Time, Love & Tenderness’ becoming best sellers. His album ‘Timeless’ sold over 9 million copies, becoming one of the best-selling albums in 1992.

Michael Bolton has appeared in small roles in films like “Meet Wally Sparks,” “Snow Dogs” and “High Voltage.” He is also the executive producer of “The Other Side of the Tracks,” a fantasy film.

In television, Bolton has appeared as himself in 4 episodes of Two and a Half Men. He also appeared in the 11th Season of Dancing with the Stars in 2010 but was eliminated early.

In 2011, Michael Bolton appeared as ‘Captain Jack Sparrow’ in the Lonely Island parody album Turtleneck & Chain. 2013 saw him releasing a tribute album “Ain’t No Mountain High Enough.” He also featured in several commercials as a singer. Bolton has collaborated with A.R. Rahman, the well-known composer from India and is working on a new album.

Bolton’s extraordinary career is not free from controversies. Michael Bolton faced a Copyright Infringement Lawsuit by the Isley Brothers, for his hit song “Love is a Wonderful Thing.”  They accused him of song-jacking their song of the same name. The court found him guilty for plagiarism on at least five places in the song, and the Isley Brothers received $5 million from Bolton and Sony Records as damage compensation.

Michael Bolton has won three Grammy Awards and three American Music Awards. His first Grammy came in 1990 for the “Best Pop Vocal Performance” for his song “How Am I supposed to Live Without You.” He won again in 1991, for “Georgia on My Mind” and in 1992 for “When a Man Loves a Woman.” He followed this success with three American music awards in 1993, 1994, and 1995. He was also nominated several times during the period.

Michael Bolton runs the Michael Bolton Charities for the welfare of women and children. The foundation works to prevent poverty, domestic violence & sexual abuse. For his charity work, Bolton has won awards like the Lewis Hine Award, the Martin Luther King Award, and the Ellis Medal of Honor.

Michael Bolton married Maureen McGuire in 1975. The couple was blessed with three daughters – Holly, Taryn & Isa. His marriage could not survive his career struggles, and they divorced in 1990. Two years later, he started an on-off relationship with actress Nicolette Sheridan. They split in 2008.

Bolton has written an autobiography titled “The Soul of It All: My life, My Music.” It was released in 2013.

Besides making music, Michael Bolton’s favourite pastime is Golf. He is an avid reader and likes to write.