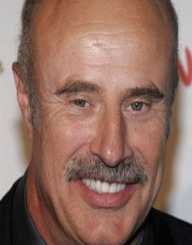 Phillip Calvin McGraw was born on September 1, 1950. He is an American psychologist and television personality. He is also an author and television host. He hosts the show ‘Dr. Phil’ which started in 2002 and is going on to date. Fame came to him when he frequently appeared in ‘The Oprah Winfrey Show’ in the 1990s. He is currently sixty eight years old.

Phillip McGraw was born on September 1, 1950, in Vinita in Oklahoma, United States of America. He was born to Anne Geraldine and Joseph J. McGraw Junior. He was brought up alongside three siblings, Brenda, Deana, and Donna. He attended Shawnee Mission North High School in Kansas, Texas. In 1968, he got a football scholarship and joined the University of Tulsa. He later transferred to Midwestern State University in Texas.

In 1988, Phillip McGraw got into trouble with the Texas State Board of Examiners of Psychologists when he hired a former patient to work for him. There were requirements the board wanted him to satisfy which he did. Hence the board closed the complaint file they had opened against him in 1990. In 1990, he co-founded Courtroom Sciences Inc. with lawyer Gary Dobbs which was a trial consulting firm. Through the fir,m he met Oprah Winfrey.

In 1995, his firm was hired by Oprah Winfrey for purposes of preparing her for the Amarillo Texas Beef Trial. In 1988, the case ended, and Oprah won thanking Phillip for his help. In 1998, Phillip got invited to ‘The Oprah Winfrey Show’ where he later became a relationship and life strategy expert. He appeared weekly in the show for the session.

In 1999, Phillip McGraw published his first book ‘Life Strategies’ which became a best seller. He later published the books, ‘The Relationship Rescue Workbook,’ ‘Self Matters: Creating Your Life from the Inside Out’ and ‘Getting Real: Lessons in Life, Marriage and Family’ among others. In 2002, he established Peteski Productions and started his show ‘Dr. Phil’.

In 2003, he began selling weight loss products such as shakes, energy bars, and supplements. In 2005, users of his products threatened to file a class action lawsuit since the products did not lead to weight loss. The following year, Phillip settled the suit for ten million and five hundred thousand dollars.

In 2005, Phillip McGraw published the bestselling book ‘Family First.’ In the same, he established Stage 29 Productions and published the book ‘Love Smart.’ The production company he formed produced shows such as ‘Decision House,’ ‘Dr. Phil House’, ‘The Doctors’ and ‘Renovate My Family’ among others. Phillip has been involved in numerous controversies throughout his career. In 2003, he founded the Dr. Phil Foundation which raises funds to help children in fighting obesity.

In 1970, Phillip McGraw married his first wife Debbie Higgins McCall, but the marriage was annulled in 1973. In 1976, he married his second wife Robin Jo Jameson with whom he has two children, Jay and Jordan. He is a Christian and a private pilot. He is currently sixty eight years old.