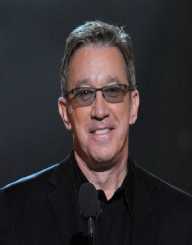 American actor, comedian, and author Tim Allen Dick was born on June 13, 1953, in Denver, Colorado. His mother Martha was a community-service worker, but his father Gerald, a real-estate agent. He is the third of five brothers in the family. When Allen was 11 years old, his father died in a car accident. His mother remarried two years later to her former high school sweetheart and moved the family to Birmingham - a suburb of Detroit. Her husband also had three children.

Allen studied at Seaholm High School in Birmingham. He attended theater and music classes and developed a love for classical piano music. After High School, he attended Central Michigan University. There he worked at the student radio station and later received a Bachelor of Science in communications with a specialty in radio and TV production. He minored in philosophy and design.

Tim Allen began his career by performing as a comedian. His first performance was in 1975, when, dared by his friends, he participated in a comedy night at Mark Ridley’s Comedy Castle in Detroit. After this, he started to get some recognition and appeared in several local commercials. He also looked on cable comedy shows, like Some Semblance of Sanity. After gaining his first attention, Allen moved to Los Angeles and started to perform regularly at The Comedy Store.

Although Allen had insufficient acting experience, he got a role in the ABC sitcom Home Improvement. Allen played the lead role Tim “The Tool-Man” Taylor. The show ran from 1991 to 1999. Allen was paid $1.25 million per episode.

1994 was one of the busiest and fruitful years for Tim Allen. He stared at Home Improvement, as well as played the main character in 1994’s highest-grossing film The Santa Clause. He also reached the top of New York Times best-seller list with his book Don’t Stand Too Close to a Naked Man.

Tim Allen continued working with Disney. He provided the voice for Buzz Lightyear in Disney/Pixar movie Toy Story. He also starred in the family comedy Jungle 2 Jungle and the sequels of Toy Story.

In 2009, Allen began narrating the TV and radio commercials “Pure Michigan” for the Travel Magazine Agency. His next film project was the 2009’s Crazy on the Outside, which he both starred in and directed. Allen helped to promote the film by doing series of stand up acts before it was released. Allen is also the official voice of the Chevrolet Cruze commercials and Campbell Soup’s “It’s Amazing What Soup Can Do” campaign. Since 2011, Allen has starred in ABC sitcom Last Man Standing.

Tim Allen married Laura Deibel in 1984. They separated in 1999, but the divorce was only finalized in 2003. The couple had a daughter - Katherine. In 2006 he married actress Jane Haiduk, which he had dated for five years. They had a daughter Elizabeth in 2009.

The series Last Man Standing is loosely based on Allen’s life since he is a Republican raising two daughters. In the show, he plays a character named Mike Baxter, who lives in a home filled with women and is fighting for his manhood and conservative beliefs.

In 1978, Allen was arrested in the Kalamazoo/Battle Creek International Airport. He was in possession of over 650 grams of cocaine. Allen pleaded guilty to charges of drug trafficking and provided the names of other dealers. He was facing possible life imprisonment, but since he cooperated with the investigation, he was sentenced to three to seven years. He served two years and four months in Federal Correctional Institution in Minnesota. That was not the last time Allen had trouble with the law enforcement.

In 1997, Tim Allen was arrested for driving under the influence of alcohol, with blood alcohol content being 0.15 percent. For his DUI, Allen was sentenced to one-year probation. He was also obligated by the court to enter a rehabilitation clinic to treat his problem with alcohol abuse.