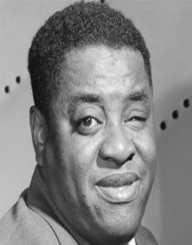 American jazz pianist Art Tatum was born on the 13 October 1909 in Toledo, Ohio to Mildred Hoskins and Arthur Tatum, Sr. His father was an elder at Grace Presbyterian Church. Tatum, who had perfect pitch, was born into a musical family: his father played the guitar and his mother, the piano. As a child, he suffered from cataracts which left him blind in one eye, with reduced vision in his other eye, leaving him legally blind. As a three-year-old, he began picking out hymns and tunes he heard on the radio, on the family piano.

Art Tatum was enrolled at the Columbus School for the Blind in 1925 where he studied braille as well as music. He also studied piano at the Jefferson School under Overton G. Rainey who taught him classical piano.

Art Tatum was first heard on the radio in 1927 where he played on WSPD in Toledo as Toledo’s Blind Pianist during a shopping programme. He then progressed towards having his radio programme. His first gig was playing at the Waiters and Bellmen's Club where he began making a name for himself. Soon he had been heard by musicians such as Duke Ellington and Louis Armstrong.

Tatum was discovered by the singer Adelaide Hall in 1931 when she heard him playing in Toledo while she was on a world tour. She subsequently hired him as one of her pianists, and in 1932, Tatum accompanied her to New York City. She introduced him on stage at the Lafayette Theatre, and he also accompanied her on four recordings.

Art Tatum worked at the Onyx Club in New York. In March 1933, he made his first solo recordings on the Brunswick label. He subsequently played in the American midwest including Toledo, Detroit, Saint Louis, and Chicago. In 1935, he was on the Fleischman Hour radio, and he played in clubs around Chicago and Los Angeles.

He went back to New York City in 1937, where he played in various clubs and was also head on national radio. Then in 1938, he left the United States and sailed onboard the liner the Queen Mary for the United Kingdom. In England, he appeared at the Ciro’s Club for a few months, then returned to the United States where he continued playing at gigs in New York City and Los Angeles.

Art Tatum recorded with Big Joe Turner on Decca Records in 1941.  He then formed a trio with bassist Siam Steward and guitarist Tiny Grims for two years before Grimes left the group. Tatum continued with solo performances as well as playing with other musicians. In 1944, appeared in a jazz concert in the Metropolitan Opera House with other jazz musicians.

Art Tatum's popularity faded in later years as public taste shifted, but he continued playing at Baker’s Keyboard Lounge in Detroit. He made his last public appearance in April 1956.

Art Tatum is considered to be the most gifted pianist in the history of jazz. He was also known for his ability to play blues music. His style had a significant influence on the development of modern jazz.

In November 1956, Art Tatum died of kidney failure in Los Angeles. His wife Geraldine outlived him by many years, dying in 2010.