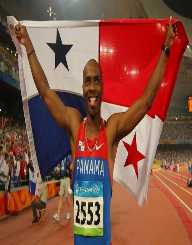 Irving Saladino was born in 1983 as Irving Jahir Saladino Aranda. Saladino is his father’s family name; Aranda is his mother’s family name. He was born in Panama. He started his career in sports very early, as his first record was set in 2006, when he was just 23 years old. His jump broke the previous South American rise. It was an indoor jump of 8.29 meters during the IAAF World Indoor Championships. This was not only his first record, but he also came in second and gained some recognition in the world of sports.

Later that same year he won another five sports events. They were all Golden League events, and the winnings were also impressive. In these five events, he earned in total 83,333 USD. A couple of months after breaking the South African record, he did it again and achieved another record. This was then an 8.56 meters long jump.

The next year was also very successful for Irving Saladino. He started the season with a jump of 8.53 meters in Rio de Janeiro in the middle of the May. Only two weeks later Saladino broke his record. He jumped 8.73 meters in the FBK Games in Hengelo.

The impressive and swift results let him become the flag carrier for Panama at the Pan American Games in 2007, which were held in Rio de Janeiro.

Later that same year he became the World Champion. He did this in three jumps, the first being 8.30 metres, the second 8.46 metres and the final one was the best – he succeeded to jump 8.57 metres. This won him a gold medal and the title of the World Champion.

The year 2008 is unofficially referred to as “the Golden Years” for Irving Saladino. He broke several records that year. He participated in the Summer Olympics of 2008, in Beijing in China. This was a huge event, not only because he had a good start, and made an 8.34 meters long jump, but because it was also a victory for the country of Panama. This was the first medal from Olympic games for Panama since the previous one in 1948. Even more, this was the first gold Olympic medal Panama ever received.

Irving Saladino returned home from the 2008 Olympic Games as a national hero. To honor his return, public offices, government, and schools were closed so that people could attend the parade in his honor. The show was taking place in the Panama city.

The public ceremony was large, very many people attended and the whole country celebrated his return and his victory. A famous boxer from Panama Roberto Durán publicly presented the medal to Saladino, which received the enormous amount of applause and appreciation. The President of Panama granted 50,000 USD to Saladino as a reward for such a result and the recognition for Panama that Saladino created.

Irving Saladino planned to participate also in the summer Olympic Games in 2012. Unfortunately, he did not compete, because he got an injury. He also could not be the flag bearer, as he was selected to be.

Saladino’s results after 2011 began slowly declining, and he decided to retire. His retirement was announced in August of 2014 after his best jump of the season was 8.16 metres.