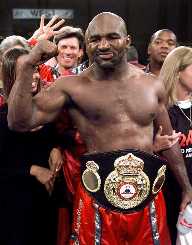 American boxer Evander Holyfield was born in Atmore, Alabama on the 19 October 1962. He was the youngest of nine children and raised by his single mother, Annie Holyfield,  with whom he credited his determination to succeed.

Evander Holyfield grew up in a tough neighborhood and early in his youth; he developed boxing skills.  His amateur record stands at 160-40. During this time he won the national Golden Gloves Championship (1984) as well as a bronze medal at the Los Angeles Summer Olympic Games (1984). At the end of 1984, Holyfield turned professional.

Then in April 1988, he knocked out Carlos DeLeon in the 8th-round and became the cruiserweight champion. He then fought heavyweight James Tallis and knocked him out in the 5th round. In 1990, he knocked James Douglas in the 3rd-round to become the World Boxing Council and the International Boxing Federation heavyweight champion.

Evander Holyfield defeated the title twice before losing it to Riddick Bowe in November 1992 but managed to regain both titles in late 1993. Holyfield then lost to Michael Moorer in April 1994 before beating Ray Mercer in 1995. In 1996, he fought Mike Tyson and in an upset, won the fight and became the heavyweight champion a third time.

There was a rematch against Tyson on the 28 June 1997, but Tyson was disqualified because he bit Holyfield on the ear. He defended the IBF title by beating Moorer in November 1997, then fought the British WBC Champion Lennox Lewis on 13 March 1999. The fight was declared a draw and Holyfield held both the IBF and WBA heavyweight titles.

A rematch was held between Lewis and Holyfield in November 1999 which Holyfield lost, but then in April 2000, Lewis was stripped of the WBA title. The WBA title was vacant until Holyfield fought John Ruiz on the 12 August 2000 and regained the title, losing it to Ruiz in 2001 in a rematch.

A third bout between the pair led to a draw which meant that Ruiz kept the title. On the 14 December 2002, Holyfield fought Chri Byrd for the IBF Heavyweight crown and lost. He also lost to Larry Donald in 2004. After an absence of two years, Holyfield won his next four fights and lost two.

Holyfield’s professional record stands 44 wins, including 29 knockouts, ten losses, and two draws. His last fight was in Copenhagen in 2011 when he beat Brian Nielsen. Evander Holyfieldofficially retired in 2014.

Evander Holyfield became a member of the International Boxing Hall of Fame in 2017. Over the course of his career, Holyfield earned more than $230 US million. He was the first heavyweight champion to win the title four times.

By 2013 it was being reported that Evander Holyfield had lost most of his career earnings largely due to gambling and three expensive divorces.