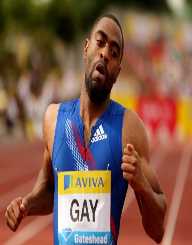 Tyson Gay is a champion track and field athlete from America who participated in the Olympic games twice – 2008 and 2012. He shares the spot for the second fastest athlete after Usain Bolt in 100m sprint. This sprinter is also known for publicly acknowledging the use of a banned substance in 2013 for which he received a one year ban from sports. At the 2012 Olympics, Tyson Gay came in 4th spot for the 100 m race beaten by Justin Gatlin for the third place by just 0.01 seconds.

Tyson Gay was born on August 9, 1982. His birthplace is Lexington, Kentucky and his star sign is Leo. His parents are Daisy Gay and Greg Mitchell. He has a sister named Tiffany. Tyson’s family has a history of sprinters including his grandmother and mother. His sister Tiffany is also a quick runner. When they were young, they were encouraged by their mother Tiffany to participate in many sprinting competitions. Gay practiced with his sister whose quick reaction time motivated him to improve his own.

Tyson Gay went to the Lafayette High School where he set a record of 10.46 seconds. He went to the University of Arkansas for higher education. Throughout his educational period, Gay participated in several running events and became the first athlete from his school to win an NCAA 100m title.

Tyson Gay turned towards a professional career in sprinting right after college. The training he did to improve his slow starts helped him improve his performances, and his 2004 tryouts for the Olympics showed promise of a rising star.

In 2005, Gay came second in 200m event of the USA Outdoor Championship. In the same year, he competed at the World Championships and came in fourth. The Americans took all the top four positions in that event. The year 2005 was special for another reason – this was the year when Gay won his first gold medal at the World Athletics Final.

With time Tyson Gay kept getting better coming in second at the US Championship in 2006. However, the winner Justin Gatlin was found guilty of doping, and hence the title was given to Gay. He proved his merit once again a year later when he became the World Champion in Osaka, Japan. He won both the 100m and 200m sprints and also was part of the gold-winning 4 x 100 relay team. His feat is impressive as he beat giants like Usain Bolt.

In 2008, Tyson Gay suffered a hamstring injury, and his performances started to decline. He was participating in the 2008 Olympic trials when the injury occurred, and he wasn’t able to take part in the event. He did recover a little next year, but Bolt was now unbeatable. Gay continued to run in different events and set new American records such as the 9.69 seconds he took to run 100m in the Shanghai event.

Tyson Gay participated in the Olympics again in 2012. He finished fourth in the 100m event and won a silver medal in the 4 x 100 relay race.

Tyson Gay created media stir when he publicly announced that he was found guilty of using a banned substance in 2013. This was due to Gay’s coaching staff feeding him the doping material, but he was banned for a year anyway. His 2012 Olympic medal was also taken away.

In 2016, Tyson Gay won the 4 x 100m relay Bronze medal with his teammates, but Justin Gatlin committed a foul, and the team was disqualified. Thus, Gay was stripped off another Olympic medal and became the fastest man not to win an Olympic medal in history.

Tyson Gay dated Shoshana Boyd and the two produced a daughter named Trinity. Gay took responsibility for the child. Trinity was fatally wounded when she was accidentally shot in a parking lot altercation between two men.