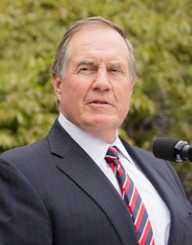 Bill Belichick is an American football coach renowned for leading the team of New England Patriots to multiple victories at the Super Bowls. He rose to fame for coaching one of the most famous quarterbacks in football, Tom Brady.

Bill Belichick tied the knot with Debby Clarke in 1977. They had three children together namely: Amanda, Stephen, and Brian. The couple divorced in 2006 with Belichick rumored to be having a relationship with Sharon Senocca.

The Father’s Legacy, The Son's Supremacy

Born as William Stephen Belichick On April 16, 1952, in Nashville Tennessee, he was the only son of Bill and Jeannette Belichick. He inherited his father's passion for football, seeing as the older Belichick worked as an assistant coach and was a local football scout at local colleges.

Growing up, he often tagged along to his dad whenever the older Belichick attended coaching meetings. Bill carried out this inheritance throughout his life and eventually, it led the ticket to his success.

Bill Belichick attended Phillip's Academy in Andover in high school. He then proceeded to enroll in Wesleyan University in Middletown, Connecticut as his choice of college. He was a regular player in the lacrosse team, which his daughter Amanda also took to participating in her college in later years. He obtained an undergraduate degree in economics upon his graduation at Wesleyan University in 1975.

The Slow Ascension To The Coaching Benches

Upon graduating from Wesleyan, Bill Belichick served as a runner for Baltimore Colts' head coach, Ted Marchiboda. He built up his connections into the NFL teams until he landed a spot as a coach in New York Giants' special unit's team.

The Giants' team participated in two Super Bowl events and won in 1991. This, in turn, attracted Cleveland Browns' owner to hire Belichick on his team as head coach. This was a rocky patch in his career as head coach for he was struggling to win the team's favor and eager to appease the team's owner as well. Eventually, Bill Belichick was fired in 1995.

Fortunately enough, he got cast as a head coach in New England Patriots thanks to the Robert Kraft, the team's owner. This decision eventually led to the formation of his dynamic partnership with Tom Brady. The duo went on to win 5 Super Bowls together: Super Bowls XXXVI, XXXVIII, XXXIX, XLIX, and LI. Bill Belichick is named as the leading head coach to lead a team to seven Super Bowl championships and winning five out of them. He has also been awarded as "Coach of the Year" thrice: in 2003, 2007 and 2010.

Due to his overwhelming success, Belichick had his share in controversies during his term as head coach in the New England Patriots. In 2007, he was fined the amount of $500,000 by the league for the incident at Spygate. In it, the Patriots had videotaped the game-calling of the coaches from various teams in secret. In turn, the team lost its chance at the first-round pick for the 2008 NFL draft, and they were also fined an additional $250,000.

Bill Belichick was also rumored to have gone out several times with Linda Holliday on the weekend of Super Bowl XLII at Arizona.