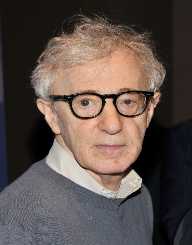 A writer, comedian and film instructor, Woody Allen was born on December 1st, in 1935, in New York. Film creation is what made Allen known by the world. Annie Hall and Manhattan are two of the most famous films he directed. He is remembered for creating romantic movies with strong female characters.

Born on December 1st, in 1935, in Brooklyn, New York,  Woody Allen and his sister grew up in Midwood, Brooklyn. His parent's rocky relationship hurt his early life.

Besides his first language, Allen spoke a bit of German in his early age. Being brought up in a densely populated neighborhood contributed to Allen's flourishing career.

Woody Allen was more interested in the extra-curricular activities. At a young age, he moved to several schools and educational institutes before settling at Midwood High School. Later he joined New York University to take on communication and film.

It was in his High school days when his career started taking shape when  Woody Allen began writing monologues. In 1954, he helped Caesar in coming with scripts that were when his career improved immensely.

At the age of 19, he received an invitation from. NBC Writer's Development Program, earning himself a job on The NBC Comedy Hour situated in Los Angeles. His first full-time job as a writer for humorist Herb Shriner came in 1955.

Woody Allen's exemplary work in the film industry has not gone unnoticed; Allen has 23 times been nominated for Academy Awards and received the award four times.

Woody Allen has been into three marriages; Harlene Rosen from 1956 - 1959. Later, Louise Lasser in 1966, their marriage lasted for three years. Soon Yi Previn is his current wife.

His father, a jewelry engraver, salesman taxi driver and later a waiter and mother a bookkeeper, were both Jewish immigrants who had Russian and Austrian roots.

Marin, Allen's father, was not particularly patient with his son; he would spank and shout at him. Despite his mother's temperamental nature, she was patient with their son's undoing. When he was 17, he officially altered his name to Heywood Allen.

Allen's juicy career was not without controversies; he was accused of misbehaving with his daughter Dylan on August 4, 1992. These accusations were later brushed off after The Child Sexual Abuse Clinic concluded their investigations.