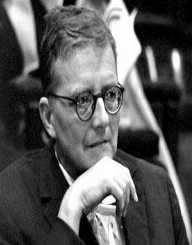 Russian composer Dmitry Shostakovich was born on the 25 September 1906 in St Petersburg Russia. His parents were Dmitri Boleslavovich Shostakovich, an engineer, and Sofiya Vasilievna Kokoulina, He had two sisters. Shostakovich's father was of Polish descent.

Dmitry Shostakovich piano lessons when he was nine years old when it was discovered that he had perfect pitch. Shostakovich then started composing although none of this early work survives. In 1919, he began studying at the St Petersburg Conservatory where Maximilian Steinberg taught him composition. He also had lessons in conducting and violin.

While attending the Conservatory, Dmitry Shostakovich made money playing piano at showings of silent films. By 1925 he had completed his First Symphony which was a critical success when performed on the 12 May 1926 by the Leningrad Philharmonic Orchestra.

After the success of his First Symphony Shostakovich’s popularity continued throughout the decade and Dmitry Shostakovich was kept busy composing music for ballets, films scores, plays and other music. His First Symphony and First Piano Concerto were both published. He finished his Second Symphony in 1927.

Dmitry Shostakovich’s first opera The Nose (1930) which debuted in 1930 was not a critical success.

During this period, Shostakovich criticised Soviet music but was involved with reorganizing the Union of Soviet Composers.

Lady Macbeth premiered in 1934 and was another success. By this stage, Shostakovich was regarded as one of the most brilliant composers of his generation. Politics intervened, and In 1936 the Communist Party started ridiculing Lady Macbeth and the publication Pravda called his music course. There was a lot of uncertainty in the artistic community as Stalin began imprisoning various artists. Shostakovich’s next work was his 5th Symphony.

In 1937, Shostakovich began teaching at the Leningrad Conservatory, and in 1939 he was made a professor. He composed the 6th Symphony during this time.

Dmitry Shostakovich was in Leningrad at the time of the siege in World War II (1941). During this time he composed the 7th Symphony which he dedicated to the people of Leningrad and its citizens. It was soon regarded worldwide as an anti-Nazi statement.

In 1943 Shostakovich relocated to Moscow where he taught at the Moscow Conservatory. He composed the 8th Symphony and other work reflective of the Soviet response to the ongoing war. After the World War II Shostakovich had to answer a case relating to the Zhdanov decree which had denounced his music. He made a full apology and promised to adhere to the party line in all future compositions. Even after Stalin died in 1953, he continued to do so. Shostakovich became chairman of the Leningrad Composers Organization in 1947. His position within Soviet society improved to the extent that Stalin asked him to attend a peace conference in New York City in 1949.

In 1950 Dmitry Shostakovich1950s his output included the 10th Symphony plus the Fourth and Five String Quartets.

Shostakovich became a member of the Communist Party in 1960. The following year, he was allowed to resume teaching at the Leningrad Conservatory. He managed to work within the existing political system from that time onwards.

His final work was his 14th Symphony which he said was a protest against death.

Shostakovich composed 15 symphonies 15 string quartets that music historians regard as some of the most important compositions of the 20th century.

When visiting the Crimea for a rest cure, Dmitry Shostakovich met and fell in love with Tatyana Glivenko. They corresponded for many years but never married. His first wife was Nina Vasilyevna Varzar (m. 1932–1954). He was married to Margarita Kraynova (1956-1960). In November 1962 he married Irina Supinskaya whom he remained married to until his death in 1973. Shostakovich had two children: Maim and Galina.

Dmitry Shostakovich was plagued by various health problems in later years, including polio and heart problems. He was diagnosed with lung cancer in 1971 and died in 1975 at age 68.