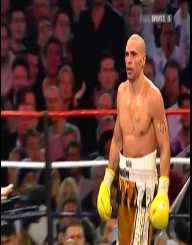 Anthony Mundine was born 21 May 1975 in Newtown, Sydney, New South Wales, Australia to Tony and Lyn Mundine. Mundine's father Tony was a successful professional fighter who instilled self-discipline and respect for education into his son. Tony Mundine ran a successful gym in the Redfern area, and this is where Anthony Mundine was exposed to boxing as a boy. Mundine Sr also instilled in his son his disapproval of drugs and alcohol.

As a young boy, Anthony Mundine showed great promise as an athlete.  He played rugby for Hurstville United, in the junior rugby league. He was then selected to play for the Junior Kangaroos.  In 1994, he was in the under 19 team which beat Great Britain in a curtain-raiser to the Australia vs. France test.

Anthony Mundine obtained his HSC. His parents stressed the importance of education when he was growing up in Redfern where the school dropout rate was quite high.

Rugby League:
Anthony Mundine was eighteen when he was selected to play professionally in the NFL League. His first team was the St George Dragons where he quickly made his mark, becoming a star in the NFL. He played in the 1996 grand final against the Manly-Warringah Sea Eagles and at the end of the season, signalled his intention to sign with the Brisbane Broncos in the Super League. During the 1997 season, he played eighteen games for the Broncos. He also playing center in the Grand Final, his team winning against the Cronulla-Sutherland Sharks in Queensland. By 1998, he returned to the Dragons and at the same time was chosen to play for the state team in New South Wales. The St George Dragons won the Grand Final.

Mundine's performance was pivotal to the win. Mundine left rugby league during the 2000 season and started to focus on boxing instead. He later said that as an Aboriginal Australian, he had put with a fair amount of racial slurs which led to his dissatisfaction with the game.  An example of this was the 1998 Barry Woods incident. Woods was fined $10,000 for a racial slur aimed at Anthony Mundine.

Mundine Sr. trained his son and this led to another stellar career for Anthony Mundine. Anthony Mundine lost no time in winning the Australian and Pan-Pacific titles. He won eleven games in a row then challenged Sven Ottke for the World Middleweight title. Steve Ottke knocked him out in the tenth round. Then in 2003, Mundine took on Antwun Echols and claimed the vacant WBA super middleweight title by beating him. Mundine successfully defended this title once but lost it to Many Siaca in Puerto Rico. He then beat Danny Green (2006), Daniel Geale (2008),  American Bronco McKart (2012) In 2014, the undefeated European champion Sergey Rabchenko arrived in Melbourne for his bout with Mundine at the Hisense Arena. Mundine was not favored to win, but he secured victory in a split decision.

The rivalry between these two Australians is legendary.  When the two fought at the Aussie Stadium in Sydney in May 2006, it became one of the most watched events in Australian television history. Anthony Mundine won the match. In a much hyped and anticipated event in 2017, Green won. In February 2017, News Corp Australia reported that Mundine had lodged a formal appeal against the decision.

Anthony Mundine and his partner Danielle had four children together. The couple has since separated. Anthony Mundine is known in Australian simply as The Man

Baptised as a young child into the Church of England, Anthony Mundine later converted to Islam in 1999.

Anthony Mundine's net worth is around the $30 million mark.

An Aboriginal man, Anthony Mundine has used his fame to speak out against racism, injustice, and poverty. He is proudly Aboriginal and stresses the importance of education for Aboriginal advancement. He has stated that he thinks Aboriginals need to be more involved in politics and the professions.  Another issue Anthony Mundine feels strongly about is that Aboriginal history and culture should be part of the general curriculum in Australia.

His paternal grandfather suffered from alcoholism; and for Mundine, this highlighted the problem of racial and cultural problems in Australia. His grandmother on his mother’s side was one of what is known in Australia as the stolen generation.