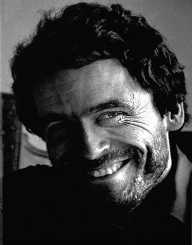 Serial killer and rapist Ted Bundy was born on the 24 November 1946 to a single mother in Vermont in the United States. He was raised by his maternal grandparents and believed that his mother Louise was his sister. He never knew his biological father's identity. When he was five, his mother married John Bundy. His mother went on to have four more children with John Bundy.

He left the University of Washington in 1968 without obtaining a degree and then spent a short time at Temple College in Philadelphia. In 1970 he returned to his studies and obtained a BA Honours degree in psychology. He enrolled at the University of Utah in 1974 and commenced legal studies.

Ted Bundy was convicted of over thirty murders, and police believed that it could have been a hundred. His first known criminal activity took place in January 1974 when he attempted to murder a young woman in her own home. A couple of weeks later he broke into another house, beat a young woman unconscious and removed her from the premises. He then raped, murdered and decapitated her. This was the beginning of a rampage that resulted in the deaths of nine woman in six months, all in Washington State. When Ted Bundy moved to Utah in 1974 to commence his legal studies, he started killing and raping again. Most of the young women were of a certain age late teens the too early twenties and looked similar to his first serious girlfriend who had rejected him.

Then in early 1975, his car was stopped by police for a traffic infringement and discovered equipment in the car that raised their suspicions. They found a mask, crowbar, handcuffs and other items. He was arrested on the 12 February 1978.

During his time in prison, Ted Bundy insisted on an interview with a Christian reporter and claimed that his addiction to hardcore pornography had caused him to rape and murder. The pornography industry in the United States took offense to his comments and defended their industry.

At his trial, Ted Bundy admitted to killing thirty women. He was sentenced to death and after a lengthy appeal process was executed on the 24 January 1989. Popular culture has shown a morbid interest in Bundy’s killing spree with one criminologist commenting that it is the young women he raped, tortured and murdered who should be remembered, not their killer.

Ted Bundy had a short-lived relationship with a fellow student at the University of Washington sometime in 1967. She ended the relationship, and some criminologists believe this may have triggered his murderous instincts and misogyny. In 1969 he met Elizabeth Kloepfer who worked at the University of Washington, and she fell in love with him. He then met Ann Boone who worked with him at the Washington State Department of Emergency Services. In 1979 he married Boone at the same time as he was standing trial for rape and murder. She had a few unauthorized conjugal visits, and a daughter Tina was born in 1982. Ann and Ted Bundy divorced in 1986.

Ted Bundy was interested in politics and a member of the Republican Party. He also worked at a Suicide Hotline Crisis Centre in Seattle, Washington State as well as the Washington State Department of Emergency Services.