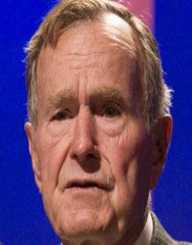 George H.W. Bush is the 41st President of the United States of America. He, along with the eldest son George W. Bush, are the only father and son in tandem who both served office as the nation's president in the history of USA. The other pair being John Adams and son John Quincy Adams. He holds the record for the longest-living president and vice-president in the U.S.

He was borne George Herbert Walker Bush on June 12, 1924, to Dorothy Walker Bush in Milton, Massachusetts. His father, Prescott Bush, also served as a politician in Connecticut.

The sudden attack of the Japanese militia in Pearl Harbor has led Bush into armed forces enlistment. George H.W. Bush was 18 at the time, putting a hold on his education. This made him the youngest pilot naval aviator in America's history of pilots.

He did his share on active duty and was honorably discharged in 1945. After the war, he decided to pursue his studies and enrolled at Yale University, also his father's alma mater and later attended by his son, George W. Bush.

Quite fresh from the war, his enrollment to Yale has made him an active student in both academics and extra-curricular activities. George H.W. Bush became a member of many fraternities such as Delta Kappa Epsilon, Phi Beta Kappa, and the Skull and Bones Secret Society. He was also an active member of Yale university's baseball team and its cheering squad.

In 1948, he graduated from Yale and obtained his degree in Economics.

Business Ventures & The Launch of His Political Career

Upon graduation, George H.W. Bush, along with married sweetheart Barbara Pierce, moved to West Texas. He married his wife while he was still enlisted in the forces. Together, they have seven children. In 1953, their daughter Robin died.

Bush ventured into the trade of oil and petroleum with help from his father's connections.

He steadily worked his way up from an equipment salesman to co-founding and establishing his own oil company. He served as the president of Zapata Offshore Company, and later as its chairman until he won a seat in the US House of Representatives in 1966. He rendered two terms for this service.

Before his election as US House Representative, became chairman for the Republican Party of the Harris Country in Texas that launched his career to politics.

The 41st President of USA

The road to the presidency was a hard-earned one for George H.W. Bush. His first attempt at running for the presidency failed with Ronald Reagan obtaining the title. However, Reagan realized his potentials and chose him as his vice president for his term.

As Vice-President, Bush made a number of diplomatic activities. He visited and discussed with various countries on these travels. He extended his reach South Korea, Africa, Europe, and El Salvador, bringing along with him the intention and good wishes of the American nation.

The Reagan-Bush duo continued their service for two terms until he ran for office in 1988 under the Republican nomination. He chose Dan Quayle, a Senator from Indiana, as his vice president. He was inaugurated the following year, the same time as the collapse of the Berlin Wall followed much later by the Soviet Union.

One of his greatest triumphs as president is George H.W. Bush's response and action to Kuwait's invasion by Saddam Hussein. By his course of action, he managed to drive Hussein away from the country.

Before he held the position of the highest office, George H.W. Bush held an array of positions in service of the country. He was chosen as the UN Ambassador from 1971 to 1973. The same year in 1973, he was appointed as Chairman of the Republican National Committee. He also served as the Central Intelligence Director and Liaison Officer in the People's Republic of China.

George H.W. Bush ran for a second term for office but ultimately lost to Bill Clinton. He and his family retired to Tanglewood, in a West Oaks community.

In 1993, Bush went to Kuwait to commemorate the victory over the Gulf War in Iraq. He was marked in an assassination plot wherein the local police apprehended people who were believed to have used a car bomb to kill Bush.

Late October 2017, George H.W. Bush was caught in a controversy regarding sexual harassment. Due to this, claims dating as far back as 1992 have resurfaced, but only the recent ones have been brought to light. Actress Heather Lind contended that she was assaulted during the screening of her show. A spokesman from Bush's side expressed his apologies for the action.

Due to his service during World War II, George H.W. Bush was awarded the Distinguished Flying Cross.  He was also named Man of the Year in Time magazine's 1990 issue.

Queen Elizabeth II of the United Kingdom has turned him into an Honorary Knight Grand Cross of the Order of the Bath.

44th US President Barack Obama also awarded him the Presidential Medal of Freedom in 2011.

George H.W. Bush has had his share of illnesses personally. For one, he suffered from Grave's disease. This disease happens when the body's immune system makes more than necessary antibodies. As a result, the thyroid glands produce more than the average the body needs. His wife, Barbara, also struggled with the same disease.

He also suffers from a type of Parkinson's disease called Vascular Parkinsonism. This particular disease had him use a motorized scooter because of difficulty in walking and stiffness of the legs.

Bush was also admitted numerous times to the hospital for bouts and complications of diseases, of which the more than common reason is bronchitis.

At 91, the former president suffered from a broken vertebra on his neck, in his summer home in the summer of July 2015.

After his wife Barbara died in the middle of April 2018, he was rushed to Houston Methodist Hospital due to an infection that turned into Sepsis, and he was put into ICU. He eventually recovered from the illness and was discharged at a later date.