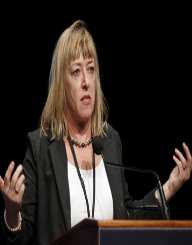 Jody Williams started out her career by serving eleven years in various projects which were related to the war in Nicaragua and El Salvador. Her work there has sometimes been described as “life-threatening human rights work.” In early 1992, Williams became the founding coordinator of the International Campaign to Ban Landmines (ICBL) and served in the organization until 1998. She served as the chief strategist and spokesperson for the organization and collaborated with governments, United Nations bodies and the International Committee of the Red Cross.

The ICBL started out as a small institution, but with her effort, it became the goal of an international treaty banning antipersonnel landmines. The ban was set in motion during a conference in Oslo, in September 1997. After this achievement, Williams was awarded the 1997 Nobel Peace Prize, becoming the third American woman to receive it.

In 2004, Williams began work on the Nobel Women’s Initiative, which was launched in January 2006. The aim of the initiative is to bring together the Nobel Peace Laureates and women seeking access to influence and support to promote their work. The Initiative works towards goals of peace, justice, and equality.

In 2007, Jody Williams became the Sam and Cele Keeper Professor in Peace and Social Justice at University of Houston, the Graduate College of Social Work. Throughout her career, she has received fifteen honorary degrees and many other recognitions. For this reason, the Forbes magazine named her one of the 100 most powerful women in the world in 2004.

Williams is also an extensive writer for magazines, newspapers and several organizations. She has also contributed chapters to many books and has written her books. In 1995, she was the co-author of the book After the Guns Fall Silent: The Enduring Legacy of Landmines. Her latest book Banning Landmines: Disarmament, Citizen Diplomacy and Human Security was released in 2008. In 2013, she released her memoir My Name is Jody Williams: A Vermont Girl’s Winding Path to the Nobel Peace Prize.