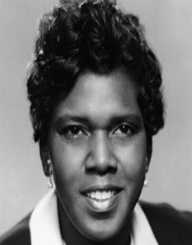 American politician and civil rights activist Barbra Charline Jordan was born on the 21 February 1936 in Houston, Texas to Arlyne and Benjamin Jordon. Her mother was a housewife and maid who also taught at the local church. Her father was a warehouse clerk and a Baptist minister.

Barbra Jordan was a pupil at  Phyllis Wheatley High School and then enrolled at Texas Southern University. After graduating from university, in 1956, Jordan was accepted into the law school at Boston University. On completion of her degree, she passed her bar exams in Massachusetts and Texas (1959).

Once her law studies were completed, Barbra Jordan returned to Houston, Texas and opened a law firm. In 1960, Jordan volunteered for John F. Kennedy’s presidential campaign, helping to achieve an eighty percent voter turnout in Harris County. She campaigned for the Texas House of Representatives in 1962 and 1964 without success.

Then in 1966, she ran for the Texas State Senate district and won. Issues she worked on included a state minimum wage that included farmworkers. Her colleagues elected her president pro tem on the 10 June 1972, a state tradition which allowed her to serve as governor for a day.

In November 1972, Barbra Jordan ran for Congress as the Democratic nominee for Houston’s 18th District. She won and subsequently become the first African-American woman from a Southern state to serve in the U.S. House of Representatives. She received support from former President Lyndon Johnson who assisted her in obtaining a position on the House Judiciary Committee.

Barbra Jordan was also the first woman and first African-American woman to give a keynote speech at the Democratic National Convention (1976). Jordan announced in 1978 that she would not be seeking re-election.

After leaving politics, Barbra Jordan returned to Texas and was appointed a full professor at the Lyndon B. Johnson School of Public Affairs at the University of Texas where she remained for the remainder of her working life.

After being diagnosed with multiple sclerosis in 1973,  Barbra Jordan had a number of other health issues. She was diagnosed with leukemia in later life and died of pneumonia on the 17 January 1996.

Barbara Jordan was the first woman and the first African-American woman to give a keynote speech at the Democratic National Convention. The speech is ranked No.5 in the Top American Speeches of the 20th Century list.

Her speech on the articles of impeachment in 1974 concerning President Richard Nixon, is listed No.13 in American Rhetoric Top 100 Speeches of the 20th Century. Jordon was inducted into the Texas Women’s Hall of Fame (1984) and the National Women’s Hall of Fame (1990). In 1992, she was presented with the Spingarn Medal from NAACP and in 1994, the Presidential Medal of Freedom.

There is a statue of Barbra Jordan at the University of Texas in Austin, Texas. She was a professor there from the time she left politics until her death in 1996. It was announced in 2011, that a Barbra Jordan Forever Stamp was to be issued as the 34th stamp in the U.S. stamps Black Heritage series.