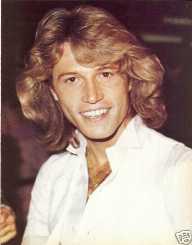 Andy Gibb was born in March 5th, 1958. He was born in Manchester, England. Early in his career, he was in Australia before shifting to work with his sibling Barry Gibb. While working on his solo career, his brothers gained fame for their renowned band Bee Gees. This occurred in the 1970s. Shadow Dancing was his breakthrough album since it was a commercial success. In spite of his successful career, Gibb fought with drug addiction. In addition to this, he was later declared bankrupt. He passed away in 1988.

Andrew Roy Gibb was born on March 5th, 1958. He was the youngest son in a family of five children. His parents, Hugh Gibb and Barbara Gibb had four other children including Lesley, Barry, Robin, and Maurice. His father Hugh Gibb was a professional singer and a bandleader.

When Andy Gibb was still young, they shifted to Australia as a family. His brothers were successful in their TV endeavors, and it is after this that their recording career kicked off. Later, their family moved back to England and Bee Gees thrived. When Gibb’s brothers were hitting the headlines, Andy was still young. Seeing this, he was inspired by his brother Barry to pursue his music career seriously.

In time, young Gibb found himself enjoying the rock and roll lifestyle of his brothers. Shortly after this, he left school with the primary intention of chasing his dreams.

In the mid-70s, Andy Gibb came up with his group and named it Melody Fayre. The team did not succeed as the members separated while trying to promote it in Australia. It did not take time before Gibb was up again, this time with a new band Zenta.

Ultimately, Robert Stigwood developed an interest for the young and talented Andy Gibb. Stigwood was the individual behind Gibb’s elder brothers’ success in their music career. Gibb’s first composition "Words and Music," was a successful hit in Australia.

When Andy Gibb was 18 years, he moved to the U.S. to fight for his solo career. During this time, he had already been married to Kim Reeder. They had to move together to Miami, Florida. He began his work with Barry, his brother. He went ahead to record his debut album, Flowing Rivers in 1977. His efforts proved bountiful as his first album featured two No. 1 hits "Love Is Thicker than Water" and "I Just Want to be Your Everything."

Andy’s solo career earned him fame and glamour that he had long wished for. He became popular among the teens to the extent that he was a star feature in their magazines. A year later after releasing his first album, he released his second named Shadow Dancing - 1978. This was a multi-platinum hit with its title leading in the charts. His professional success was nothing close to the drug abuse problem he was fighting.

During the 80s, things got worse even as he released his last album After Dark - 1980. Soon, his substance abuse got better of him and made him lose jobs. Previously, he landed the job as a co-host in the show Solid Gold. He later lost his position as he did not show up for work. This also happened in Broadway as he was fired by featuring in Joseph and the Amazing Technicolor Dreamcoat.

During the mid-80s, Andy’s addiction problem got serious and he had to seek for medical help. He went to Betty Ford Clinic after his family pushed him to do this. After some time, he was back performing again. Unfortunately, he did not manage to regain the fame that he once had. Andy Gibb was declared bankrupt considering the fact that he had used all his earnings while he was enjoying his success.

In 1988, he signed a new label with Island Records. He traveled to England to make his recordings but never finalized the project that he had initiated. His health began to deteriorate after celebrating his 30th birthday. He died on March 10th the same year. Cause of death was determined to be myocarditis, which is a heart condition.