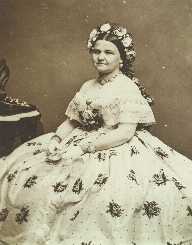 Mary Todd grew up in a rich family in Kentucky with her parents. Sadly, her mother died when she was only a child, and her father soon remarried to a cruel woman. Even with the hostilities at home, Mary Todd was still able to live a prosperous life with her family. Her parents even gifted her an advanced education [for a girl at this time] which allowed her to attend boarding school, where she studied a variety of humanities subjects, including literature and French.

Mary Todd married Abraham Lincoln on November 4, 1842. Mary’s parents did not approve of the union. At the time, Lincoln was only a lawyer. He was not rich, and he had little formal education--almost the opposite of what Mary was raised with. Even with her parent’s disapproval, Mary went through with the marriage.

The Lincoln’s welcomed their first son, Robert Todd Lincoln, in 1843. The couple quickly had another son, Edward Baker Lincoln, in 1846. By this time, Lincoln was hard at work building his political career, and Mary was by his side every step of the way. Many people at the time were impressed with how often she would attend political functions, which few other political wives at the time did.

In 1850, the Lincolns welcomed another new son into the world, William Wallace Lincoln. Sadly, one of their other sons, Edward, died in this same year. His cause of death was tuberculosis. The couple had their fourth and final son, Thomas “Tad” Lincoln, in 1853.

In 1860, it was confirmed that Lincoln had won the presidency; he was later inaugurated in 1861, which made Mary the first-lady of the United States. Soon after this wonderful event, the several of the southern states succeeded from the country, forming the Confederate States of America. This soon sparked the beginning of the American Civil War.

Amidst the nationwide tragedy of the Civil War, Mary Todd was also struck with the personal tragedy of losing another one of her sons, William, who died from typhoid fever, in 1862. The death of another son drove Mary into a deep depression. She then developed an interested in spiritualism and the paranormal, which worried her husband and children.

In 1865, tragedy struck again when Lincoln was assassinated by John Wilkes Booth. After this, she moved to Illinois with her sons. Sadly, another son, Thomas, died in 1871. Mary became more depressed than ever. She started acting strange, too. She bought things she couldn’t afford and was constantly worried about her safety. Because of this, her remaining son, Robert, had her committed to an asylum, where she stayed for almost a year.

After leaving the asylum, Mary Todd moved abroad for several years before returning to live in the United States with her sister, Elizabeth Todd Edwards, in 1881. She lived with her sister for the rest of her life.

Mary Todd Lincoln died on July 16, 1882, in Illinois, USA. Her cause of death was a stroke. She was 63 years old when she passed away.

Mary Todd Lincoln has been portrayed in several films over the last 50+ years. Some of the films that her “character” has been in including the following: Lincoln, The Trial of Mary Lincoln, Abe Lincoln in Illinois, and Abraham Lincoln: Vampire Hunter.

Several biographies and other books have also been written about the life of Mary. Some of these books include The Insanity File: The Case of Mary Todd Lincoln, Mary Lincoln: Biography of a Marriage, The Trials of Mrs. Lincoln, and Mary Todd Lincoln: A Biography.