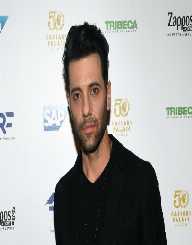 Criss Angel is an award-winning American Illusionist as well as a magician. He is so much known for his live performance illusion show Criss Angel Believe. This show is often done in collaboration with Cirque du Solei at the Luxor Casino in Las Vegas. He is known to have been on primetime television for more hours than any magician in the history. Thus, he broke his way as one of the most successful magicians in the world in this contemporary era. He is known to be a singer too and serves as the frontman for his band, Angel.

He also collaborated with Klay Scott, a rock musician for Angeldust. He developed much interest in magic and started his first show at age 12. Harry Houdini, a legendary magician, greatly inspired the great skill possessed by this young boy. He went to magician school instead of college as wished by his parents and met a resounding success. He later traveled to Las Vegas where his success rebounded to become one of the best-known magicians this day. He also has a number of World-record.

Criss Angel was born on December 19, 1967, in New York to Dimitra and John Sarantakos. His parents were of the Greek origin, and her father is known to own a successful restaurant and doughnut shop. At age seven, he got interested in magic after he was shown a card trick by his aunt. He practiced different magic tricks ceaselessly till she mastered a few of them. He performed at a birthday party while he was 12 and people there were awed. He schooled at East Meadow High School, but he performed at a local restaurant while he was there. He later chose to pursue his career as a professional magician against his parents wish.

His career kickstarted when he chose to tour with other traveling performance acts immediately he was out of school. He often goes to public libraries to know more about the history of magic. It was there he learned to dance, martial arts and the art of mysticism. He chose to adopt the stage name, Chris Angel. Being a natural performer, he was able to create some credible illusions which made him become a very popular magician as well as an illusionist. He later got an opportunity to perform in 1994. His appearance was part of a one-hour ABC primetime special, Secrets.

Due to his skill and talents, his fame kept growing till he got the support of a big fan of his who asked him to work in his film Lord of Illusions. He later made several television appearances between 1997 to 2003. He starred in The Science of Magic I & II. He also started his stage show Criss Angel Mindfreak and ran for more than 600 performances by 2003 after a two-year analysis. Soon, he got one hour for his television special Supernatural and was aired by SciFi Channel. He performed different amazing stunts. He later transformed his stage show into an A&E Network show. There, he performed stunts in which he walked on water or fly over the Valley of Fire suspended from a helicopter with his bare hand.

In 2013, at the celebration of the fifth year anniversary of his stage show, Criss Angel Believe which was started with CIrqu du Soleil in 2008 was broadcast in a series based show. The show was titled Criss Angel BeLIEve and was broadcast on Spike TV. The series contained eleven one-hour episodes with different illusions for its first season. He is also a singer who has performed with heavy Metal Band Angel who collaborated with an industrial rock musician. He also produced the soundtracks for his television series Mindfreak.

He is best known and remember for being the concept creator and star of the show Criss Angel Believe.

Criss Angel married in 2002 to his longtime girlfriend, JoAnn Winkharf but the couple divorced four years later. He, however, got himself involved with many women after his separation from his wife. His net worth is estimated at $50 million.