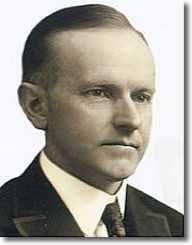 Calvin Coolidge was born on July 4th, 1872. His place of birth was in Plymouth Notch in the United States. He was the Progressive Republican in the Massachusetts government. Later on, he became the 30th president of the United States of America. Before this, he was serving as Warren G. Harding’s vice president.

After the president’s death in 1923, Coolidge took charge of the office. He was nicknamed “Silent Cal” for he was a man of few words. Coolidge did not run for the second term in office. He died at the age of 60 in Northampton.

Calvin Coolidge was born on July 4th, 1872. His time of birth is regarded to be on Independence Day. As a result, he stands as the only president to date that was born on Independence Day. He was born to John Calvin Coolidge Sr. and Victoria Josephine Moor. His father had some businesses that made him famous. However, he was famous for being a prosperous farmer and a public servant.

Some of the local offices that Coolidge Senior was in charge of includes: justice of the peace, tax collector, etc. Coolidge’s mother died when he was still young. Abigail Grace Coolidge, his sister, also died a few years after their mother had passed away.

Calvin Coolidge went to Amherst College situated in Massachusetts. After graduating from college, he went on an apprenticed in Hammond & Field law firm. A few years later in 1897, he got his admission into the bar. One year down the line, he managed to open his law office.

After serving as a Northampton Mayor in 1909, he ran for the state Senate after which he won and was therefore elected to serve as the state senate of the Massachusetts government. He served in this office from 1911-1915.

Calvin Coolidge’s political career was on the rise, and he went on to become the governor in 1918. He earned respect from his people after calming down the Boston Police Strike which occurred in 1919. As a result of his efforts in ensuring that the strike crisis came to an end, he gained nationwide popularity.

A year later, Calvin was chosen by the Republicans to serve as the vice president running mate to Senator Warren G. Harding. Harding was running for the presidential seat in 1920. The two won by a landslide as they amassed over 60% of popular votes.

Warren G. Harding and Calvin Coolidge took office on March 4th, 1921. Coolidge performed several duties while serving as the vice president. He even became the first vice president to attend cabinet meetings. He was also the individual that would attend Washington parties. Through his form of interaction with people, he was mimicked “Silent Cal.”

Shortly after, the president died in 1923. The president was on a tour when he passed on. The vice president, Calvin Coolidge, had gone to his family home in Vermont. Back in the day, this place had no electricity, and therefore communication was through the use of messengers. It was at this point when news got to him about the president’s death. He had to be sworn in by his father, a public solicitor.

After the president’s death in August, Coolidge addressed the Congress in December the same year. In his speech, addressing the nation, it was evident that he supported some Harding’s policies. While in office, Coolidge signed the Immigration Act. This act was meant to bar immigration from eastern and southern European countries. In 1924, he also approved a bill that granted citizenship to Native Americans that were born in the U.S.

In 1924, elections were here, and Calvin Coolidge was again nominated to run for the presidential office. He won these polls in spite of the grief that he had after losing his son.

In 1905, Calvin Coolidge tied the knot with Grace Anna Goodhue. She was a teacher in a deaf school. This couple was the opposite of each other regarding their personalities. His wife, Goodhue was talkative by nature. Coolidge, on the other hand, was a serious individual with few words. The couple had two sons together. Unfortunately, one of their sons died when he was still a teenager.

Calvin Coolidge suffered from coronary thrombosis which led to his death on January 5, 1933. He died at the age of 60.