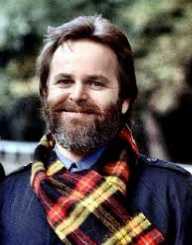 Carl Wilson is an American musician. He is best known as one of the founders of the band The Beach Boys.

Carl Dean Wilson was born on December 21, 1946, in Hawthorne, California. His father Murry would later be the band's manager. He had two older brothers, Brian and Dennis. The family enjoyed the music. Wilson learned how to play the guitar while he was in his teens.

In 1961 when Carl Wilson was 15, he along with his brothers, their cousin Mike Love, and a friend Al Jardine started the band called The Beach Boys. They became known for their beach vibe and harmonious songs that reflected surfing. Their first single, “Surfin',” made the Billboard Hot 100 singles.

In 1964, Wilson worked as a co-writer for some of the Beach Boy songs including “Dance, Dance, Dance.” He spent most of those first few years of recording in the background. When his brother Brian retired from the band in 1965, Wilson became more of the lead vocalist for the group for songs such as “Good Vibrations” and “Wild Honey.”

Carl Wilson became a stronger songwriter in the 1970s, writing for both The Beach Boys and other artists. He produced music for Ricci Martin as well as the Flames from South Africa. Wilson also sang backup for artists such as Elton John, David Lee Roth, and the group Chicago.

The early 1980s was a time in which the band struggled to come up with new material. Some, like Wilson, opted to go solo. This included two albums for him, including a self-titled rock-n-roll album. He toured solo for two years and opened for bands like The Doobie Brothers. The band reunited in 1983.

The Beach Boys released an album in 1985, but it was their big success in 1988 “Kokomo” with Wilson as lead vocal in the chorus that got them out of their slump of hits.

Carl Wilson and the Beach Boys continued touring. Even while Wilson was diagnosed with cancer and receiving chemotherapy, he continued to tour through 1997. Even after his death, the Beach Boys released recordings that were not previously made public in their album Gettin' in Over My Head in 2004. Other recordings were released from archives in box sets and other band members' solo albums.

Carl Wilson is remembered as the lead guitarist and co-founder of The Beach Boys. He and the band brought rock and pop music with a summer, beach harmony.

Carl Wilson married Annie Hinsche in 1966. The couple had two sons. They divorced in 1980. Wilson then married Gina Martin in 1987. The couple was married until his death.

Carl Wilson died on February 6, 1998, in Los Angeles, California at the age of 51. The cause of death was complications from lung cancer.

During the Vietnam War, Carl Wilson refused the draft and was granted a conscientious objector status so long as he performed at prisons and hospitals for free.

Carl Wilson and the Beach Boys were inducted into the Rock and Roll Hall of Fame in 1988. The group also received the Recording Academy's Lifetime Achievement Grammy Award in 2001.