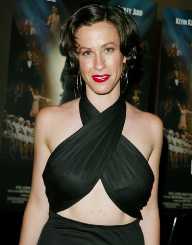 Alanis Morissette was born on June 1, 1974, in Ottawa, Canada. Her parents are Georgia and Alan Morissette.

In the mid-1990’s, Alanis Morissette moved from Canada to Los Angeles. Around this same time, she also began to work with Maverick Records. She then began working on a new album, Jagged Little Pill, which was released in 1995. This album was moderately successful with fans and wonderfully successful with critics; Alanis Morissette won several awards for this album. Shortly after releasing this album, she took a break from music to rest. Her music career gave her an intense schedule that she couldn’t keep up with. However, she later released Supposed Former Infatuation Junkie, in 1998. This album proved to be highly popular among Morissette’s fans, especially her teenage fans.

Morissette's next album was released in 2001, called Under Rug Swept. This album was extremely successful, selling over a million albums in the United States alone. It wasn’t until 2004 that Morissette released her next album, So-Called Chaos. This album was not nearly as successful as her last one. It had mixed reviews from both critics and fans. After this, she took another break from her music.

As of 2017, Alanis Morissette continues to write and perform music.

Before her music career, Alanis Morissette had a child-acting career. In 1986, she was a part of the show, You Can't-Do That on Television. She was on this show for several episodes. She later used the money to fund her music career.

It wasn’t until 1999 that Alanis Morissette returned to acting, as she had been focused on her music career in years previous. In this year, she had a small part in the film Dogma. After this, Morissette spent much of her time as an actress working in bit roles on television shows. Some of the shows she acted in during the 2000’s included Curb Your Enthusiasm, American Dreams, and Nip/Tuck.

In the 2010’s, Alanis Morissette continued to work mostly in television shows. Some of this shows she’s worked on most recently include Weeds, In Sixty, and Up All Night. She has also appeared in the films Radio Free Albemuth and The Price of Desire.

Alanis Morissette has won several awards for both her music career. Some of her most impressive awards are listed below.

Alanis Morissette married Mario Treadway in 2010. Together, this couple has two children Ever Imre and Onyx Solace Morissette-Treadway.