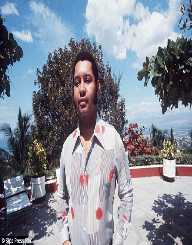 Jean-Claude Duvalier affectionately known as Baby Doc was the President of Haiti from 1971 to 1986 when he was ousted through an uprising. He came to power after the death of his father, Francois Duvalier in 1971. After assuming power, Jean-Claude Duvalier delegated much power to his advisors and initiated some changes in the policies of his father. Jean-Claude Duvalier presidency was characterized by acts of corruption and human right abuses with thousands fleeing the country into exile. Poverty among the people during his regime reached the roof while he lived an extravagant lifestyle and having a state-sponsored wedding in 1980 with US$2million.

However, corruption in the country became high not only among his appointed official but was deeply involved. Jean-Claude Duvalier amassed wealth through several shoddy deals including drug trafficking and selling the corpses of Haitian to foreign medical schools. The situation got out of hands and increased dissatisfactions among the people. Global reports on corruption cited him as the sixth most corrupt leader in the world amassing worth between US$300 million and US$?800 million through corrupt practices. Human rights abuses in the country also increased, and several Haitians flee the country into exile. Several other people including his mother, Simone Ovide Duvalier were from the country for criticising his administration.

The Haitian economy fell to its knees during the outbreak of African swine fever virus in 1978 when pig farmers lost their investments through the Eradication of Porcine Swine Fever and for the Development of Pig Raising authorized by the US agricultural department. This brought about hardship and agitation among the farmers. The tourism sector of the country was also highly hit in the 1980safter reports of the high rate of HIV/AIDS among people. Living conditions in the country worsened, and the plight of the people begun to increase and therefore their displeasure towards the Jean-Claude Duvalier administration increased.

A visit by Pope John Paul II in March 1983to the country and his declaration that things should change in Haiti heightened the moral of the people to rise against the government. Opinion leaders, clergy, and people conscience were awakened, and that started series of demonstrations in the country in 1985. The first to happen on the street was in Gonaives, where the demonstrators raided food-distribution warehouses. It then spread to places like Cap-Haitien and Les Cayes. Jean-Claude Duvalier started to implement some strategies, including a 10 percent cut on the staple for prices and reshuffle but that did not solve the issue.

Jean-Claude Duvalier then started to close down independent radio stations and the use of police and army to crackdown the demonstrators, which also failed. As the incident was getting out of hands, the President Reagan of the United States of America and other intermediaries appointed by Jamaican Prime Minister, Edward Seaga urged him to step down. Though the US denied him asylum to the country, they offered to fly him out, and on February 7, 1986, he was flown to France on US Air Force aircraft.

The school of thought was that, after Jean-Claude Duvalier had successfully returned to the country without any charges by the government, Jean-Claude Duvalier could leave and claim the government had no intention of prosecuting him to enable him to have access to the frozen account. This was because laws in Switzerland demanded that a state could have access to monies saved in the country after that country had demonstrated that those monies were acquired through illegal means.

The Haitian government showed interest in claiming the money and therefore on January 18, 2011, Jean-Claude Duvalier was arrested and charged with corruption, theft, and misappropriation of state funds. Although Jean-Claude Duvalier was released later, the prosecution continued but was stalled in the way. After refusing to attend to court proceeding on three occasions, a warrant was issued by the court ordering him to appear before it  February 28, 2013, and that was when he pleaded not guilty to all the charges.

Jean-Claude Duvalier was married to Michele Bennett Pasquet on May 27, 1980, with a state-sponsored wedding that cost US$?2 million. The luxurious wedding received many criticisms among the people as the living condition or an ordinary citizen at the time was low. The couple had two children, Nicholas and Anya Duvalier. They however divorced in 1990. Duvalier also had a mistress named Veronique Roy. He died on October 4, 2014, from a heart attack.