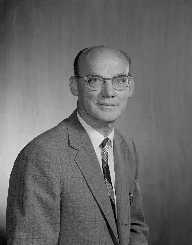 Owen Chamberlain was born in 1920. He was born in California, in San Francisco. In 1937 he graduated high school in Philadelphia and continued with his studies further on in Dartmouth College. There he received a bachelor degree in 1941. He continued his studies in University of California, Berkley, until the beginning of the World War II in 1942.

From 1942 to 1946, Owen Chamberlain joined the Manhattan Project at the Argonne National Laboratory. The Manhattan Project was a secret program for the United States to create an atomic bomb. He worked there together with an Italian physicist Emilio Segré, whom he had previously already met at the University of California. They were researching nuclear cross-sections for intermediate-energy neutrons and spontaneous fission of heavy elements.

In 1943, Owen travelled to Los Alamos in New Mexico, where he witnessed the testing of the atomic bomb.

After completion of the experimental work in Chicago in 1948, Chamberlain decided to return to Berkley in California. There he worked together with his friend Segré and a couple of other physicists. They were analysing the diffraction of neutrons in liquids.

In 1995, Owen Chamberlain together with a team of physicists in Berkley discovered the antiproton. Anti-proton is a particle identical to a proton; the only difference is that it is negatively charged. His following studies concentrated on anti-protons and how these particles interact with other elements, for example, hydrogen. The discovery of antiprotons (also called negatrons) led Chamberlain to receive a Nobel Prize in Physics. He shared this win with Sergé.

The research of anti-protons led to the production of antineutrons, and later on, in 1957 Chamberlain received a grant to study antinucleons in Rome. After that, he returned to the University of California as the Professor of Physics. Together with other colleagues in 1960, he developed polarized proton targets.

Later Owen worked on the Time Projection Chamber together with Dr. David Nygren.

Owen Chamberlain was not only a brilliant scientist but also was active in politics. He spoke forcefully against the Vietnam War, and the abuse of research conducted by scientists in the Soviet Union. He was part of the team who founded the nuclear freeze movement in 1980.

Owen Chamberlain got married in 1943 to Beatrice Babette Copper. They had three daughters and one son. Unfortunately, their marriage lasted only until 1978. Two years later, in 1980, Chamberlain remarried to June Steingart Greenfield. This marriage did not last long, as after that he got married one more time, to Senta Pugh Gaiser.

Owen Chamberlain developed Parkinson’s disease in 1985. He continued teaching for a couple more years despite the illness but decided to retire in 1989. The disease progressed, and after developing complications at the age of 85, Owen Chamberlain died in 2006.