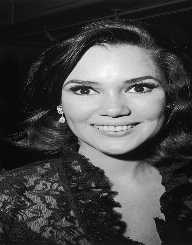 Game show host, actress, and singer Brett Somers were born Audrey Johnston in New Brunswick, Canada on the 11 July 1924. She was raised in Portland, Maine and later moved on her own to Greenwich Village.

After moving to Greenwich Village, she changed her name to Brett Somers. She began her career working in theatre and later in television in shows such at Playhouse 90 and Robert Montgomery Presents. Brett Somers made her Broadway debut in Maybe Tuesday.

During her stage career, Somers appeared in various productions including Happy Ending, The Country Girl, and The Seven Year Itch. At the same time, she was also working in film and television.

During the 1970s Somers appeared as a panelist on the game show Match Game and remained on the show for nine years. She became famous for her wit, oversized glass and effervescent personality.

After an early marriage to Robert Klein which produced a daughter Leslie Klein, Somers married Jack Klugman in 1953. The couple had two sons, David (b1959) and Adam (b. 1963). The couple separated in 1974 but did not divorce.

Somers died of cancer on the 15 September 2007 in Westport, Connecticut.