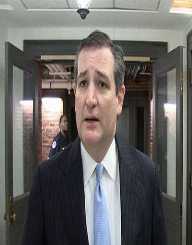 Ted Cruz is one of the topmost American politicians who is known to have campaigned for the Republican Presidential nomination in 2016. He is known as the senator from Texas, United States. He was an intelligent and ambitious fellow who had his Bachelor of Arts in Public Policy. He is known to have been endowed with an oratory skill which has made him win several prestigious debate competition as a student. He is also known to be the US National Speaker of the year in 1992 before he proceeds to Havard Law School.

Ted Cruz received his Juris Doctor degree, and at that period, he was a Brilliant student as well as an editor of the Havard Latino Law Review. He later ventured into his legal career as well as politics where he received a lot of accolades and a big boost. Ted Cruz later gained a lot of prominences and released strong speech against Obama’s healthcare plan. In 2012, he became elected as the US Senator from Texas.

Ted Cruz was born on the 22nd day of December 1970 in Calgary, Canada as Rafael Edward. At his birth, his parents were oil business workers. Later, his family moved to the United States. He studied and graduated from Second Baptist High School, Houston as Valedictorian in 1988. Ted Cruz later went to Woodrow Wilson School of Public and International Affairs where he graduated with a Bachelor of Art in Public Policy. He was known to have won some prestigious debates as a college student. He later studied at the Havard Law School where he got his Juris Doctor degree. It was while he was ta Havard that he became a founding editor of Havard Latino Law Review.

His career started when he engaged and served as a law clerk to one J. Michael of the United States of Appeals for the Fourth Circuit as well as the Chief Justice of the United States, William Rehnquist. Ted Cruz later went forward to work with Cooper, Carvin& Rosenthal between 1997 and 1998. While he was there, he prepared testimony for the impeachment proceedings against President Clinton.

In 1999, Ted Cruz joined the Bush’s campaign as a domestic policy adviser. He advised Bush with his knowledge in law and policy in the area of immigration, constitutional law and a host of others. He was later appointed the Solicitor General of Texas in 2003 till 2008. Ted Cruz got involved in some high profile cases which include nine appearances in Supreme Court. He is known to be very successful as he has authored about 70 United State Supreme Court Briefs as well as 43 oral arguments. He later returned to practice as a private lawyer in 2008. He started his law firm, Lewis &Bockius LLP and represented corporate firms.

Ted Cruz defended two record-setting 54 million dollars personal injury award in New Mexico at the appellate level. He is also known to have involved and pushed his cases to Supreme Courts and appellant courts. He later became a United State Senator from Texas after winning the election which he was originally an underdog in 2012. He is a pro-life as well as a strong antagonist of same-sex marriage. Ted Cruz announced his candidacy for the presidency in the 2016 presidential election. However, he was unable to make it to the final general election.

Ted Cruz drafted amicus brief signed by attorneys general of 31 states in the case of District of Columbia v Heller. He then went ahead to defend the Ten Commandments monument constitutionality successfully. He is also known for involving himself in so many top and high profile cases like the Elk Grove Unified School District v. Newdow.

Ted Cruz was named the Man of eh Year in 2013 by conservative publications like The American Spectator. Townhall.com later awarded him the 2013 Conservative of the Year

In 2001, Ted Cruz married Heidi Nelson with whom he had two daughters. His wife is known to have worked in the White House for Condoleezza Rice. She is also known to be an investment banker.  He is a very successful and highly placed lawyer with an estimated net worth of $3. 5 million.