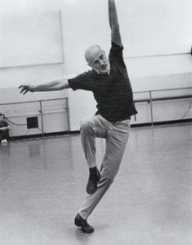 Jerome Wilson Rabinowitz was born on October 11, 1918, in Lower East Side in Manhattan, New York. He was born in the Jewish Maternity Hospital, in a neighborhood highly populated with immigrants at the time. His middle name was given in honor of the president Woodrow Wilson. In early 1920, the family moved to New Jersey, where his father opened the Comfort Corset Company. His father’s business was growing, and he had many connections in the show business. His surname was changed legally to Robbins in the early 1940s.

Robbins began his interest in dance while at school. In high school, he began studying modern dance with Alys CK Bentley, who encouraged her students to improvise steps to music. After high school, Robbins went to study chemistry at New York University but had to drop out after a year for financial reasons. He then decided to pursue dance full-time. He joined the Senya Gluck Sandor company, a leading expressionistic modern dance group. He was also encouraged to take ballet lessons with Ella Daganova and studied Spanish and Asian dancing, as well as dance composition. Robbins made his stage debut with Yiddish Art Theatre in a role in The Brothers Ashkenazi.

In 1937, Jerome Robbins began dancing at Camp Tamiment and in the choruses of Broadway shows like Grat Lady and Keep Off The Grass. During this time he also began creating dances for Tamiment’s Revues, both comic and dramatic genre. His dances were often controversial, one of them being the “Strange Fruit,” later performed in New York City at the 92nd Street Y by Billie Holiday. In 1956, Robbins joined the American Ballet Theatre, but beforehand he was a soloist with the company. He became known for his performances in Helen of Troy as Hermes, Three Virgins and a Devil as the Youth and in the title role of the play Petrouchka.

In 1944, Robbins created and performed a ballet about sailors on liberty- Fancy-Free. His work incorporated classical ballet into the 1940’s social dancing and screwball plotline. The same year, Robbins also choreographed the musical On the Town, which launched his Broadway career. Robbins insisted the chorus reflect the racial diversity of New York City crown, which broke the color bar on Broadway for the first time. His next musical was Billion Dollar Baby in 1945. In 1947 he produced the ballet High Button Shoes, for what he earned his first Tony Award for choreography.

The same year, Robbins became one of the first members of the Actors Studio and began attending classes three times a week. While working on Broadway, Robbins continued his work in ballet, creating several stylistically diverse works, like Interplay and Facsimile. In 1949, Robbins left Ballet Theatre and joined the newly formed New York City Ballet as Associate Artistic Director.

His move to New York City Ballet distinguished Robbins as both dancer and choreographer. He continued his work on Broadway, staging dances for plays such as Call Me Madam, The King and I and on the musicals A Tree Grows in Brooklyn and Wish You Were Here. In 1954, in collaboration with George Abbott, Robbins created The Pajama Game. The play launched the career of Shirley MacLaine. He also created, choreographed and directed Peter Pan, which he re-staged for the small screen, winning him an Emmy Award in 1955. In 1957, Robbins choreographed and directed the famous West Side Story- a contemporary version of Romeo and Juliet, set in Hell’s Kitchen. The West Side Story earned Robbins his second Tony Award for Choreography.

In 1956, Robbins’ muse Tanaquil Le Clercq contracted polio and was paralyzed, which made Robbins withdraw from his activities at the New York City Ballet for early ten years. During this time he established his own dance company, Ballets USA, which premiered at the inaugural season of Festival of the Two Worlds in Spoleto, Italy. In 1958 his company toured Europe and the US and appeared on The Ed Sullivan Show.

In 1961, Robbins co-directed the movie version of West Side Story. However, he was fired from the production as soon as the principal photography was complete. When the film received 10 Academy Awards, Robbins won two for his Direction and one for Brilliant Achievement in the Art of Choreography on Film. The following year, he directed the play Oh Dad, Poor Dad, Mamma’s Hung You in the Closet and I’m Feelin’ So Sad. The production ran for a year off-Broadway and was later transferred to Broadway.

Robbins also gained a reputation as a show doctor, after taking over several troubled productions, including A Funny Thing Happened on the Way to the Forum and Funny Girl, which turned Barbara Streisand into a superstar. In 1964, Robbins won Tony Awards for direction and choreography in Fiddle on the Roof. During the 1970s, Robbins continued to choreograph and stage productions for the Joffrey Ballet and the New York City Ballet. He worked almost exclusively in classical dance, pursuing only stage revivals of West Side Story and Fiddler on the Roof. In 1989, he created the stage anthology show Jerome Robbins’ Broadway, earning him yet another Tony Award.

Jerome Robbins was never married and did not have any children. He was in relationships with several people, including Montgomery Clift, Nora Kaye, Buzz Miller and Jess Gerstein.

In 1990, Robbins had a bicycle accident, and four years later, he underwent a heart-valve surgery. In 1996, Robbins started to show signs of Parkinson’s disease. His hearing was deteriorating. Robbins’ last project was Les Noces for City Ballet in 1998. Not long after, he suffered a stroke and died at his home in New York.

Amongst the many awards he received during his career, Robbins was also awarded the Academy Award for Best Director for West Side Story. In 1981, he received the Kennedy Center Honors and The National Medal of Arts in 1988. He also holds three honorary doctorates and an Honorary Membership in the American Academy and Institute of Arts and Letters. He was inducted into the American Theater Hall of Fame in 1979.