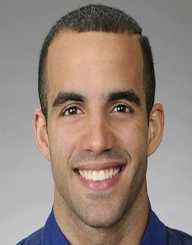 Danell Leyva is the youngest athlete to represent the US team in any Olympic gymnastics. Born in Cuba, he is also the first American of Cuban heritage to make it to the team.

Danell Leyva did not attend regular schooling. His mother instead opted to homeschool him. Leyva was introduced to gymnastics at a tender age of four. Both his mother and stepfather were accomplished, Cuban gymnasts. After settling in Miami, Leyva’s parents opened up a gymnastics training facility.

As a young child, Leyva suffered regular asthmatic attacks. Due to this, his mother was hesitant to let the young Leyva take on the sport. It took the intervention of his stepfather for his mother to let him in the gym.

His mother never gave Danell Leyva any chance of progressing in the sport. With sheer determination and encouragement from his stepfather, Leyva slowly perfected his art. In 2006, at the age of 14, he competed in his first major tournament. The exposure at the Winter Cup cemented his passion for the sport.

That same year, he competed in the junior category of the Visa Championships. This is the common name for the US National Championships. He was feted with two gold medals and a silver medal. The gold medals came from the floor exercise and the horizontal bars, while the silver was from the parallel bars. He also won the best all-around gymnast medal.

2008 was a fulfilling year for young Danell Leyva. He competed again at the Visa Championships, increasing his gold medal tally to four. He successfully retained his all-around gymnast and won the parallel bars title. Leyva added the high bar and pommel horse gold medals to his closet. Riding on the Visa success, he later that year competed in the Pan American gymnastics held in Argentina.

Leyva won the horizontal bar gold medal for the US team. He was with the US team at the Pacific Rim gymnastics tournament. The American team took the overall title. Leyva got the all-around gold. He also went up the podium for the bronze medal in the parallel bars competition.

Having had a promising start in the junior category, Danell Leyva took his winning mentality to the senior level. He was chosen to represent the American team at the age of 17. This made him the youngest ever male gymnast to make it to the national team. Leyva represented the US in the World Artistic Gymnastics Championships for five years. This was in 2009 in London, 2010 in Rotterdam, 2011 in Tokyo, 2014 in Nanning, and 2015 in Glasgow.

In 2010, he was with the American team for the Pacific Rim tournament in Melbourne, Australia. Leyva won three gold medals and bronze.

Danell Leyva is a famous Olympian. He was with the US team in the 2012 London Olympics and the 2016 Rio de Janeiro in Brazil. He was a bronze medalist in the all-around category in the London Olympics. While in Rio, he won two silver medals in the parallel bars and the horizontal bar.

Apart from competing in the arena, Danell Leyva is also a brand ambassador for the Adidas sportswear label. Leyva has a sponsorship agreement with the German outfit since 2013.

In addition to his agility in gymnastics, he has starred in some television series. In 2018, he featured in Hialeah, and Don’t Leave a Message. Leyva was in another 2018 production Sear Up.

The celebrated gymnast lives in his hometown of Homestead in Florida. Danell Leyva has a younger sister called Dayanis Mesa. Mesa works with a Spanish television station. Leyva is at home with several languages. He speaks Spanish and English. He is good in Romanian and Italian. Currently, he is learning the language from the land of the rising sun, Japanese.

Danell Johan Leyva took up his challenge with immense determination. His biggest critic was his mother. Trained by his guardian stepfather, Yin Alvarez, Leyva proved his critics wrong by achieving medals from nearly all the competitions he went to.