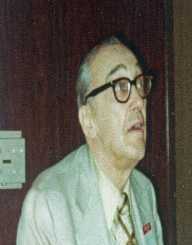 Alfred Elton van Vogt was born 26th April 1912. He was born in Manitoba, Canada. His parents lived in a Russian Mennonite community, but during the Great Depression, his father, a lawyer, moved the family on several occasions, to try and find work.

Alfred Elton van Vogt couldn’t afford college fees and worked in several different positions to pay for it. One of his jobs was as a freelance writer, beginning with love stories, radio plays, and articles for trade publications.

Von Vogt’s first science-fiction work, Black Destroyer, was released in 1939. This was followed up with his second story, Discord in Scarlet.

His first novel, Slan, was published in 1946. This work has remained his most famous.

Alfred Elton van Vogt took the plunge in 1941, becoming a full-time writer. He had been working at the Canadian Department of National Defence, but he left his job in pursuit of a writing career.

Alfred Elton van Vogt wrote many short stories, and many of these would be grouped and turned into novels at a later date. He was a prolific writer, particularly during the 1950s.

He moved to Hollywood in 1944 and continued to write. After World War II, Alfred Elton van Vogt  was deeply affected by the “police states” that emerged, and he strayed from science-fiction to mainstream with his novel The Violent Man which was set in communist China.

Alfred Elton van Vogt  found a very successful formula with his writing, which he followed most of the time. He also said that many of his ideas came from his dreams, and that he would wake at several times throughout the night to write while the ideas could be remembered.

Alfred Elton van Vogt was prolific in his writing, particularly in the genre of science-fiction, and his career spanned more than 60 years. He wrote 39 novels and many short stories during that period. He also penned four non-fiction publications, and had 24 collections of works.

1946:   Invited with his wife as the Guests of Honor to the 4th World Science Fiction Convention

1980:   Presented with the Canadian Casper Award for Lifetime Achievement

He then married Lydia Bereginsky in 1979. She was a former model and court interpreter, specializing in Russian. Van Vogt was with Bereginsky until his death.

Science-fiction is a hugely popular genre in writing and also films and television. Van Vogt is recognized as one of the greatest contributors to his genre.