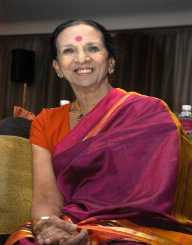 Mrinalini Sarabhai was a famous Indian Choreographer and classical dancer. She was also a prolific writer. She has authored poetry, novels, and stories for children and also plays. She was a founder of Darpana Academy of Performing Arts in Ahmedabad.  This is an academy where music, drama, and dance were taught. She strongly believed that dance evolves.

She is best remembered for her major contributions towards art. This earned her many awards throughout her life. She set history when she became the first choreography classical dancer. Among the dance skills, she learned from famous gurus include Mohiniattam, Kathakali, and Bharatanatyam. Her dancing skills made her famous both locally and internationally.

Mrinalini Sarabhai was born on May 11th, 1918. Her place of birth was in Kerala in India. Her parents were Subbarama Swaminathan alias Dr. Subbarama Swaminathan and Ammu Swaminathan. Her father worked at Madras High Court as a barrister. He was also a principal at Madras Law College. On the other hand, her mother was a freedom fighter, social worker and ex-member of parliament. She learned Dalcroze dance movement while they were living in Switzerland.

Mrinalini Sarabhai studied under Shantiniketan in India. She developed her interest in dancing here and decided to pursue it. She later joined American Academy of Dramatic Arts in the US. She took dancing classes then returned to India to further her training in classical dance.

Renowned Gurus taught most of her classical dances. Meenakshi Sundaram Pillai taught her Bharatanatyam (classical dance form of the south Indian). She was then taught Kathakali by Thakazhi Kunchu and learned Mohiniattam from Kalyanikutty Amma.

Mrinalini Sarabhai was taught by the best dance gurus of her time. She, therefore, became such a graceful and talented dancer. She also had great support from her husband, Dr. Vikram Sarabhai. Her talent together with moral support from someone she loved took her to greatest heights of her career. She stood tall among other classical dancers at her time.

In 1949 she established Darpana Academy of Performing Arts. This was with help from her greatest supporter, her husband.  Other branches of the institution were opened with time. It came to be famous for the various forms of art taught. Apart from teaching art, the institution was also a platform for positively influencing policymakers and the general public using art. She has since then choreographed in This Mahabharata and Krishna-Gopala musicals along with over 300 dance dramas.

Mrinalini Sarabhai married Vikram Sarabhai in 1942. He was a renowned physicist from Ahmedabad, in Gujarat. They were blessed with two children- Kartikeya and Mallika. Their daughter Mallika grew up to be a dancer like her mother.

Mrinalini Sarabhai died a natural death on January 21s, 2016. This was at Ahmedabad, Gujarat, India. She was 97 years old at the time of her death.