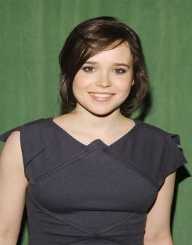 Canadian Actress Ellen Grace Philpotts-Page, known as Ellen Page in the professional circuit, was born on February 21, 1987, in Halifax, Nova Scotia, Canada to Martha Philpotts, a teacher by profession and Dennis Page, a graphic designer. She was brought up in Halifax and received her secondary education from the Halifax Grammar School and also attended the Neptune Theater School to learn acting.  After the 10th grade, she briefly attended the Queen Elizabeth High School before graduating from the Shambhala School in 2005. She participated at the Vaughan Road Academy along with her close friend and fellow Canadian actor Mark Rendall for two years in Toronto, Ontario, to study the Interact Program.

Ellen Page appeared in her first local production at the age of 10 when she was studying in the fifth grade. It was a CBC Television Movie ‘Pit Pony’ made in 1997, and she received Canada's prestigious Gemini nomination for her role in it. The television movie was later spun off into a television series. She went on to appear in several small Canadian films including Marion Bridge, her first feature film role and in television series like ‘Trailer Park Boys’ (2001-02) and ‘ReGenesis’ (2004). Her portrayal of Treena Lahey in season two of Trailer Park Boys received many accolades.

Incidentally, Marion Bridge won the award for Best Canadian First Feature at the Toronto International Film Festival and Ellen Page won a Gemini Award for her role of Lilith in the first season of ReGenesis (2004). She received her first Gemini Award for ‘Best Performance in a Children's’ or Youth Program or Series’ for her role in the television series ‘Mrs. Ashboro's Cat’ (2004).

At age 16, Ellen Page appeared in ‘Mouth to Mouth,’ an independent film shot in Europe. However, her first big break came in the form of the role of a young girl in the 2005 movie ‘Hard Candy,’ where the character takes a pedophile hostage, a 30-year-old photographer and looks to expose him. It was the performance of a lifetime, and her characterization of Hayley Stark won her rave reviews and was hailed as one of the most complex, disturbing and haunting performances of the year. Her performance as Hayley Stark in ‘Hard Candy’ caught the attention of director Brett Ratner. He cast Page as Kitty Pryde in her first big budget feature ‘X-Men: The Last Stand’ (2006).

The character of the girl Kitty Pryde, who can walk through walls, was used for the first time as the main character whereas, in the previous X-men films, the part had only been used in brief cameos played by other actresses. Page was nominated for the Teen Choice Award for Choice Movie Scene Stealer for her role in the film.

During the summer of 2006, Ellen Page appeared in many films including “An American Crime,” “The Tracey Fragments” and “Smart People.” In early 2007, she went to Vancouver for shooting the comedy film ‘Juno,’ in which she would portray the title character. The film created quite a stir and her acting as a pregnant teenager earned International critical acclaim for her. The quick-witted, wise yet innocent characterization of Juno McGuff earned Page an Academy Award nomination for Best Actress, which she eventually lost to actress Marion Cotillard for the latter's role in the film in La Vie en Rose.

Besides the Academy Award nomination, Ellen Page received the BAFTA, Golden Globe and SAG Best Actress nominations, and won the Independent Spirit Award for her performance in Juno. She won more than 20 awards for the role including a Canadian Comedy Award, an Independent Spirit Award, and a Satellite Award and also won numerous critics choice award including Detroit Film Critics Society, Austin Film Critics Association, and Florida Film Critics Circle. She was named ‘Breakthrough Actress of the Year’ at the Hollywood Film Festival’s star-studded Hollywood Awards for her role in Juno.

After the all conquering success of Juno, Ellen Page continued to hold onto the success in her upcoming films also. She starred in the films like ‘Smart People’ (2008) and ‘Whip It’ (2009). In the first film, she portrayed the character of a secluded and emotional daughter of a college professor, and in the second, she appeared as a roller skater in the Derby league.

Foraying into more serious and mature roles, Ellen Page appeared in the film 'Inception’ alongside Leonardo DiCaprio and Joseph Gordon-Levitt in 2010. She followed these films with the independent film ‘Peacock’ (2010), and the dark comedy ‘Super’ (2010), opposite Rainn Wilson and Liv Tyler. ‘Smart People’ was premiered at the 2008 Sundance Film Festival. The film was shot before Juno but released afterwards.

Ellen Page worked as a voiceover artist in many television series. She lent her voice to the television series ‘Glenn Martin DDS’ in 2011 and the popular cartoons ‘Family Guy’ and ‘Out There’ in 2012 and 2013 respectively. Her voice was also used for the main character in the video game ‘Beyond: Two Souls to life.’ She returned to the X-men franchise and starred in the ‘X-Men: Days of Future Past’ (2014) repeating the role of Kitty Pryde.

Ellen Page also hosted Saturday Night Live on March 1, 2008. In 2010, she appeared in a series of advertisements for Cisco Systems as their spokesperson comprising three commercials set in Lunenburg, Nova Scotia.

Ellen Page is one among the 30 celebrities who in 2008 participated in an online ad series for US Campaign for Myanmar, calling for an end to the military dictatorship in Myanmar.

She practiced meditation and yoga and attended Buddhist school in her young age. She is a vegetarian and an atheist. PETA named her the Sexiest Vegetarians of 2014 along with Jared Leto. She was ranked #86 on FHM's Sexiest Women in the World list in 2008 and placed at #93 for 2009.

In February 2014, during a conference in Las Vegas, Ellen Page publicly declared her sexual orientation as gay. The conference was supposed to address issues related to the LGBT community. She is a resident of her hometown Halifax, Nova Scotia at present.