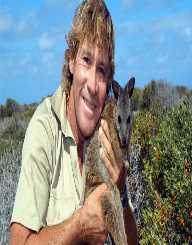 Animal lovers and activist will forever remember Steve Irwin. Although he lived a short life, he left an indelible mark on animal and nature conservation. Steve Irwin was an Australian born on February 22, 1962, in Melbourne. Widely known as the Crocodile Hunter, he was a Television personality and animal activist. Irwin became popular with the wildlife documentary “The Crocodile Hunter” and his appearance on talk shows.

Steve Irwin, however, died while filming the documentary, “Ocean Deadliest,” after a stingray had pierced him in the chest with its barb. Until his untimely death, he was the owner of the Australia Zoo, a property left for him by his parents.  After his death, he was honored by the Sea Shepherded Conservation Society with a ship named “My Steve Irwin.”

Steve Irwin was born on February 22, 1962, to Lyn and Bob Irwin in Essendon, Melbourne. At age eight, they moved to Queensland where his parents established a wildlife park mainly with reptiles. Irwin had his primary education at the Landsborough State School and continued to Caloundra State High School. His love for animals was just natural because he grew around them. He was taught how to handle the crocodiles and other animals at a young age and was given a 12-foot python as his sixth birthday gift. He was also trained how to wrestle crocodile at age nine under his dad’s supervision. This made him confident with the animals and played an active role in their daily management.

Steve Irwin started a career though in a voluntary position at the Queensland East Coast Crocodile Management program. There, he helped capture crocodiles for relocation while some were also left at his park. In 1991, he entirely took over the management of the family park and renamed it Australia Zoo in 1992. Irwin and his wife Terri took their passion for animals onto the screens with the shooting of The Crocodile Hunters. With their lives centred on animals, the first episode of the series was a video of them trapping crocodile during their honeymoon. The series made its debut on Australian TV in 1996 and became popular in North America in 1997.

The show spread like wildfire reaching about 200 countries including UK and US and over 500 million having access to it. Always with an appealing look and having his way with the animals, the program was also used to educate viewers on wildlife. American cable network Animal Planet also picked the program up, and you would always love how passionate he presented with his easy-going appearance. The channel ended its telecast of The Crocodile Hunter with the three-hour series Irwin’s Last Adventure. In the series, Irwin and his crew took their adventure across the Himalayas, the Kruger Park, Yangtze River and Borneo.

Steve Irwin also did documentaries like The Crocodile Hunter Diaries, Croc Files and New Breed Vet with Animal Planet. He also worked on projects like 10 Deadly Snakes in the World. In 2002 Irwin featured in the film The Crocodile Hunter: Collision Course where he acted as crocodile protection. The crocodile had swallowed a tracker and was sought for by some CIA Agents whom Irwin mistook as poachers. The film did well and won Best Family Feature Film at the Young Artist Awards.

Steve Irwin was not only passionate about the conservation of wildlife but also the environment as a whole. He did his environmental campaigns through sharing touching stories on how beautiful nature is. He never missed words on the need to also protect endangered species and ending indiscriminate land clearing which led to habitat loss. He was the founder of Steve Irwin Conservation Foundation now Wildlife Warriors Worldwide and co-founded International Crocodile Rescue. The Ghan, a passenger train which ran from Adelaide to Alice Springs, harnessed Irwin’s popularity by appointing him an ambassador in 2004. He was also active an active campaigner of Australia tourism especially that of Queensland.

Steve Irwin and his crew joined in a search for two missing scuba divers in Mexico after hearing via his boat radio that the divers were missing. Irwin was in Baja California Peninsula, Mexico filming a documentary on sea lions at the time. However, they suspended the filming and joined the search. One was found alive on the second day of the search, but the other was dead when found.

Steve Irwin, an enthusiastic wildlife conservation activist, was lost on September 4, 2006, tragically. It all happened during the filming of a series titled “Ocean Deadliest” near Port Douglas, Queensland. Steve was pierced in the heart by the barb of a stingray while snorkeling around it. It is presumed that the stingray acted in self-defence and unfortunately took the life of Irwin. The news threw fans and wildlife lovers and the entire world into a state of shock. Tributes to him flooded the Australia Zoo while people across the world expressed their condolences to the great loss. November 15 has been set aside internationally in his remembrance.

Steve Irwin was highly criticised on several occasions for abusing the animals for his gains. Some were critical of how he used the animals during his show and accused of endangering their lives. The issue of threatening triggered again in 2004 but this time, not the animals but his son. In a picture, Steve was seen feeding a crocodile whiles holding his son. This was met with public uproar with people accusing him of putting his son’s life in danger. Steve in reaction to that said, he was introducing his son to wildlife and nature as his parents also did with him.

Steve Irwin was married to an American Naturalist, Terri Raines Irwin. The two first met at the Australia Zoo when Terri was on a visit to a wildlife rehabilitation facility. The two fell in love at first sight, got engaged after four months and later married on June 4, 1992. He fathered two children, Bindi Sui Irwin and Robert Clarence. The couple was so enthusiastic about animals that they spent their honeymoon trapping crocodiles. The video was used for the first episode of The Crocodile Hunter. When it comes to sports, Steve Irwin was an ardent fan of cricket and tried playing it sometimes. He also loved rugby and martial arts.

Steve Irwin has gotten himself and his family named after some animal species. A turtle species he discovered while on fishing with his dad in 1997 was later named Irwin’s turtle (Elseya iriwni) in honour of his family. In 2009, an Australian air-breathing land snail was named Criskeysteveiriwni in his honour. He got a national recognition when he was given a Centenary Medal by the Australian Government in 2001. Three years after, he was also adjudged Tourism Export of the Year.

Irwin was also recognised by the University of Queensland's School of Integrative Biology and made him an adjunct professor. Sea Shepherd Conservation Society, an environmental action group, also renamed their vessel MV Robert Hunter,“My Steve Irwin” in his honour. Irwin’s worldwide appeal also gained him recognition in Rwanda and a baby gorilla was named after him in 2007 for his contribution towards wildlife conservation.