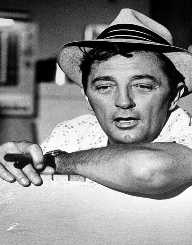 Robert Mitchum was born on August 6, 1917, in Bridgeport, Connecticut, USA. His parents were Ann and James Mitchum. He also had two siblings, John and Julie, who also great up to be actors. Sadly, Robert's Father died when he was a toddler, so he never got to know him. Ann remarried after Robert’s death and gave birth to another daughter, Robert’s half-sister.

As a teenager, Robert Mitchum was expelled from high school. Afterward, he traveled throughout the country on the railroad, taking odd jobs around the way to support himself. For a short time, he also worked as a boxer.

In the late 1930’s, Robert Mitchum found himself living with his sister. It was she who inspired him to get into acting. He first joined the Players Guild of Long Beach. Here, he worked on several plays. He broke into film and television in 1943. Like most actors, he started out small. He wasn’t even officially credited for some of the early movies he was in because he had such small parts. Some of the earliest films he worked on were Bar 20 and Doughboys in Ireland. He continued to have small parts throughout the 1940s and into the 1960’s. In most of his movies, he played the villain. Some of his famous movies from this era are listed below.

In the 1970’s, Robert Mitchum decided that he wanted to try out new roles. He experimented with all types of roles, trying to vary up his resume by trying out any character that wasn’t a villain. IN this era of his career, he spent a lot of time on war films and westerns. He even tried his hand at acting in television shows like The Winds of War, North and South, War and Remembrance, and African Skies. Some of the movies he worked on from the 1970’s to the end of his acting career in 1997 are listed below.

Throughout his whole acting career, he acted in over 100 films and television shows.

Throughout his long acting career, Robert Mitchum won almost a dozen acting awards and was nominated for almost a dozen more. Some of his most prestigious awards are listed below.

Robert Mitchum married Dorothy Spence in 1940. The couple had three children together. The marriage only ended in 1997 because of Mitchum’s death. Many people were surprised the marriage lasted so long, especially since it was well-known that he was almost constantly cheating on his wife.

Robert Mitchum had many health problems during his life. He was a known alcoholic, and he smoked every day. He was eventually diagnosed with lung cancer. This cancer late caused his death. He passed away on July 1, 1997, in Santa Barbara, California, USA. He was 79 years old when he passed away.