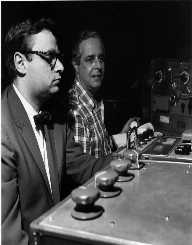 Bob Thiele was born on July 27, 1922, in Sheepshead Bay, New York. He started out his career when he was 14 years old, hosting a jazz radio show. Thiele also began playing clarinet and had a band with whom he performed in the New York area. When he was 17 years old, Thiele founded his company Signature Records label. His company became very successful and recognized many jazz musicians, such as Lester Young, Errol Garner, and Coleman Hawkins. The company was joint with Decca Records in 1952.

In 1961, Thiele became the director of the Impulse Records. While with the company, he began working with John Coltrane and recorded several artists, such as Dizzy Gillespie, Charles Mingus, Archie Shepp and Albert Ayler. The most successful song under his production was Louis Armstrong’s “What a Wonderful World.” During the recording of the song, the ABC records president Larry Newton had to be locked out of the studio after he got into a heated argument with Thiele.

Bob Thiele worked with Impulse! Records until 1968. In the late 1960s, he produced artists for the Bluesway Records label. His work from this time was with B.B. King, John Lee Hooker, and T-Bone Walker, as well as with many other artists.

In 1968, Thiele separated his ties with ABC records and Impulse!, and formed his own company, Flying Dutchman Productions, and later formed the record label with the same name. The record label is now part of the Sony Music Entertainment group. In later years, Thiele formed the Red Baron Records, which released several compact disc albums. In 1994, Thiele co-wrote the song “You” with Bonnie Raitt.
Bob Thiele died of kidney failure on January 30, 1996.