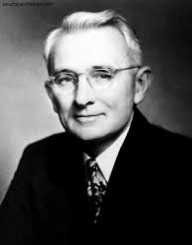 Dale Harbison Carnegie was born into a family of modest means in Maryville, Missouri on the 24 November 1888. He was the second son of Amanda Elizabeth and James Carnegie. During his childhood, the family relocated to Warrensburg. In 1910, the family moved to Belton, Missouri.

At the high school, Dale Carnegie joined the debating team and became interested in oratory. After graduation, he enrolled at State Teachers College, Warrensburg, Missouri. He could not afford to pay for dorm fees so lived at home and commuted to college on his horse.

During his time at college, Dale Carnegie felt inferior both because of coming from a modest background and also because he was not a natural athlete. An avid reader since childhood, he turned to public speaking to help him gain confidence. He graduated from college in 1908 and did several jobs including working as a salesman and for a meatpacking company.

When World War I was on, Dale Carnegie joined the US Army at Camp Upton on Long Island where he spent 18 months.

After World War I, Dale Carnegie worked as a business manager for Lowell Thomas while he was on a lecture tour in the United States. Afterwards, Carnegie continued teaching and from 1930 onwards, recruited people nationwide to sell his professional development course under license.

The courses became popular and in 1936, his book, How To Win Friends and Influence People, was published by Simon & Schuster. The book quickly became a bestseller and made Dale Carnegie a household name in the United States and elsewhere.

After the death of Dale Carnegie in 1955, his widow, Dorothy took over the business and was at the helm as the company developed internationally offering courses in over 70 countries with millions of graduates worldwide.

Dale Carnegie's first wife was Lolita Beaucaire (m.1927-div.1931). In 1944, he married Dorothy Price Vanderpool. He had two children: Donna Dale from his marriage to Dorothy and a stepdaughter, Rosemary, from Vanderpool’s first marriage. On 1 November 1955, Dale Carnegie died of Hodgkin's Disease. Dorothy Carnegie remarried and was known as Dorothy Carnegie Rivkin.