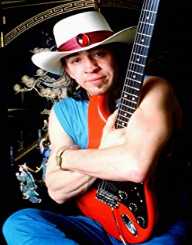 Stevie Ray Vaughan was born on October 3, 1954, in Dallas Texas. He belonged to middle class family and music was his only passion. He was born to Jimmy Lee Vaughan and mother Martha jean Vaughan. A shy insecure boy and he had bad experiences during childhood days. His father was an alcoholic and treated his family badly.

Vaughan started playing the guitar at the age of seven, inspired by elder brother Jimmy guitarist, who later helped to form fabulous Thunder Birds. In 1961, Vaughan got his first guitar for his seventh birthday. At the age of 12, he was playing in the garage bands and in few years he joined professional bands. At 17, he dropped out of high school to concentrate in music.

In 1972, Vaughan moved to Austin, Texas. He used to play drums, saxophone, and guitar. Vaughan took odd jobs to make ends meet. He never learned to play guitar but played only by the ear. He became one of the world’s famous electric Blues guitarist of the 1980s.

Stevie Ray Vaughan was playing in rock bands by age of 12. His first recording was for garage band called “A Cast of Thousands,” and his style was different from other bands. He first joined and performed in Jimmy’s group.

In 1970, Stevie started playing nine-piece horn bands and then formed his first blues band and then Blackbird after one year. This year he made first studio recordings with the band which made him popular. Vaughan’s first music band was the Cobras who played in clubs and bars. His next group was Triple Threat which included Lou Ann Barton among Five vocalists’.

In 1978 January, they recorded four songs in Austin including Vaughan s own composition that made the band famous. Gradually their popularity spread outside the Lone Star State in 1982. Mick Jagger invited them to play at a private party in New York City. The same year famous producer Jerry Wexler arranged for the Vaughan band to play in Monteux jazz festival.

Vaughan’s musical abilities caught the attention of David Bowie, who gave chance to play on his upcoming album Let’s Dance. Vaughan and his bandmates were agreed and signed for record deal. Stevie was voted best talented and best guitarist in Best Electric Blues, which reached number 31 on the charts and went gold in 1985. There were Grammy nominations in 1984 and named him as entertainer of the year and Best Blues instrumentalist of the year. In 2014, Rolling stone graded Vaughan as 12th greatest guitarist of all time.

Vaughan’s next album was Texas Flood was released in 1983. This made Vaughan a blockbuster blues success. This received positive reviews in both Blues and rock publications reaching 38 on the charts. In 1985, the band went on a six night tour on a Japanese with various performances and interviews. In March, the band started to release their third album Soul to Soul. It was also good success reaching number 34 on the charts. On September 30, Vaughan received his fifth Grammy nomination for the best “Best Rock instrumental performance for one of its songs.

Though Vaughan’s profession was reaching high, Vaughan was sinking deep into Alcoholism and drug addiction. In spite of his bad health, he continued his profession by releasing the album Live Alive in 1986. When he was in American tour, early 1987 Vaughan was checked into rehabilitation clinic. In 1990 Vaughan and his brother stepped into the studio to work an album Family Style, but Stevie never lived to see it. This album made them to reach number 7 in the chart.

Stevie Ray Vaughan married Lenora “Lenny” in 1979. They met first time at one of his performances at Austin. They both got divorced after Lenny misused his money on drugs with other men. In 1986, he met Janna Lepidus in New Zealand and started liking her. When he was in London, she visited him, and he referred to her as fiancé. Vaughan slowly got addicted to drugs and alcohol. Then he decided to stay away from it and checked him to Peach Ford hospital a Rehab centre and began to lead spiritual life. After that, he stayed away from drugs and alcohol.

On August 27, 1990, Vaughan was traveling in a helicopter to Chicago. Because of the thick fog, the chopper crashed into the mountains, and everyone on board was killed. He was buried at Laurel Land memorial park, Dallas.

Vaughan’s legend has grown just a year after his death. Vaughan was recognized by Texas governor who declared October 3, 1991 “Stevie Ray Vaughan Day.”

Vaughan’s work was a very short lived musical career. His albums consist of songs written on personal and spiritual growth earned him a Grammy. Stevie was the main person to start the Blues Hall of Fame and had won several awards nominations like Grammy award and Austin music awards.

Vaughan joined with his brother Jimmy to record an album Family Style in 1990. This album consists of ten songs, but both brothers wanted to do an album together, and it was released only after Vaughan’s death.